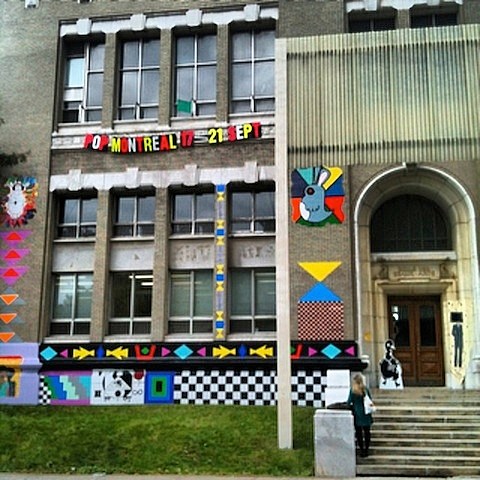 Pop Montreal happened last week at venues all over the Quebec city. I've been to M for Montreal many times, but this year was my first Pop and it was a pretty fun time. One thing you notice almost straight away is that unlike some festivals, this one clearly feels like it is for its home city first and foremost. Luckily, Montrealers are a friendly sort of folk. There were a handful of "international" acts (Ty Segall, Twin Shadow, Suzanne Vega), but the lion's share of the music was Canadian and specifically from Quebec. And there are no shortage of bands and artists in Montreal. I saw a bunch of them.

The festival works basically like SXSW, you get a badge which allows you in to all the participating venues (most in the city). Unlike SXSW however, said venues are not all conveniently located on or around a six-block stretch. There are patches of venues clustered around, but if you're trying to take advantage of your badge's club-hopping abilities, it involves hoofing it or cabs. I found myself on Saint Laurent a lot, which has La Sala Rosa, Casa del Popolo, Divan Orange, and a few others right around each other. There aren't a lot of day parties like you get at SXSW and CMJ, but plenty of late-night afterparty action.

I missed the basketball game and Steve Albini cooking class, but across five days, many Cadence Weapon sightings and the single worst hangover I've ever experienced, these were some of the Pop Montreal musical highlights:

The Unicorns @ Metropolis (9/21): Reforming at Arcade Fire's behest, Montreal cult band Unicorns played their final home show on the last night of Pop. It really is a different experience seeing them in their hometown. They did two single-note band hit encores as a joke before finally leaving the place with "I Was Born (a Unicorn)." 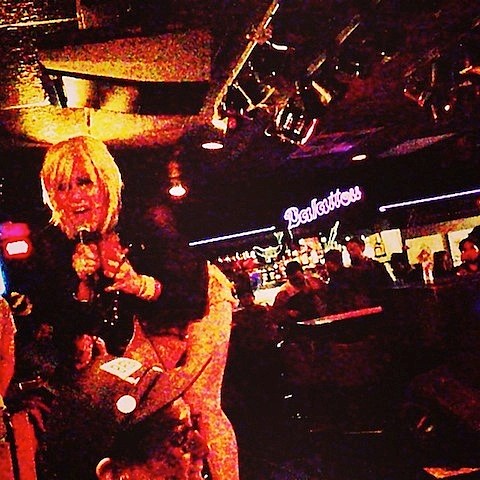 Light Fires @ Ballattou (9/17): Toronto cross-dressing synthpop solo act Light Fires opened for Unicorns at Metropolis but I also caught her the first night of the fest at Ballattou, which clearly used to be a strip club. The seedy atmosphere fit Light Fires' vibe well, which was part Hedwig and part Erasure. (Her record's pretty good.) I stuck around afterwards for LA Foster who used to be in Mozart's Sister but now makes her own synth-n-B on her own.

Choses Sauvages @ Club Lambi (9/19) I don't think I've gone to Montreal and not seen a Francophone dancerock band, and this trip it was Choses Sauvages who were playing another place that seemed like it used to have exotic dancing. The French language works well for this kind of funky disco and the band goes the extra mile in the live department, hamming it up just enough.

TOPS @ Sala Rossa (9/19): TOPS are one of the more popular rising bands in Montreal and I'd seen them play a few times already (plus their old band Silly Kissers), but they've come a long way even in the last year. Jane Penny's confidence as a frontperson has grown and guitarist David Carriere's playing is Steely Dan clean. Hearing them do "Way to Be Loved" live was maybe the highlight of the fest. They'll be in NYC soon with Wampire, and for CMJ as well. Moon King opened and also just seem to get better. 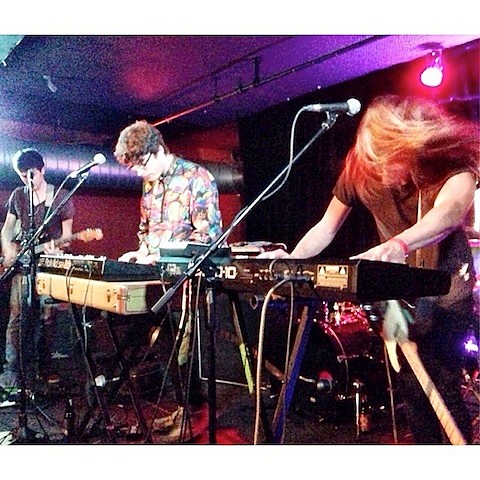 Holy Data @ Divan Orange (9/20): Featuring ex-members of Sunset Rubdown and Parlovr, with a fair amount of synths and effected guitars, Holy Data make a swirling, occasionally muscular brand of dreampop. You can check out a couple demos on their soundcloud.

Monomyth @ L'Escogriffe (9/18) Hailing from Halifax, NS and having all four members write and sing, I couldn't help but compare them a bit to Sloan. But Monomyth sound nothing like them though. Like Sloan, the styles of the songs vary wildly depending on who's singing (one of them clearly went through a jam band phase). But the songs are uniformly terrific, ranging from powerpop to warbly indiepop. Also, I really like L'Escogriffe's down-n-dirty rock vibe. Their new album, Saturnalia Regalia, came out this summer on Mint (stream it via Spotify)

Pat Jordache @ Pop HQ (9/20): I've seen Pat play a few times, and it's always a different lineup of the band. Here they were a three piece (no drummer) but their sound has gotten darker and groovier. Liquid bass, ala Japan or early Brian Eno, with appropriately gothy (but not too) vocals. We're due for some new music from Pat Jordache soon, keep an eye out.

The Muscadettes @ L'Escogriffe (9/20): Shouty two-piece (plus drummer live) who are here to have fun and make sure everyone else does too. Heaps of attitude and the songs loads of fun. Currently working on their debut album, you can check out a single here.

SEOUL @ The Plant (9/20): In addition to official shows, I also went to a Pop Montreal fashion show (weird/cool), and on Sunday checked out DIY space The Plant that reminded me of RIP Brooklyn spots Dead Herring and the old Silent Barn. Someone brought bagels from St. Viateur and you could help yourself, and between bands folks hung out behind the building where the railroad passed by every so often. SEOUL, who make airy pop that would sound at home on a Prefab Sprout album, are good Sunday afternoon hangout (hangover) music. They'll be in NYC for CMJ too.

Pop Montreal has announced dates for next year: September 16 - 20.