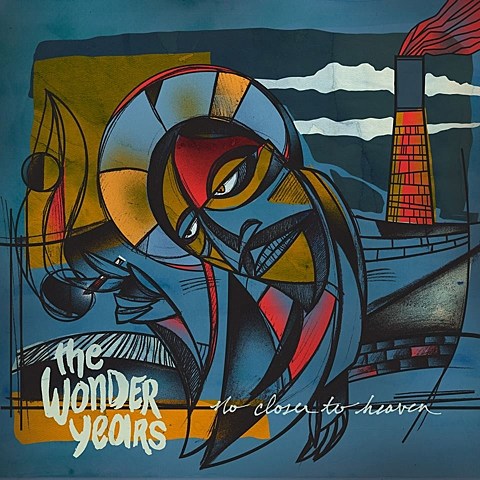 "Pop punk" was once widely considered a dirty term in most indie rock circles, but over the past few years it's been sneaking into indie rock vernacular. We use it here on BV a lot. Pitchfork has used it when talking about anyone from Cloud Nothings to Upset to Joyce Manor. Stereogum has used it for The Sidekicks, Chumped, and Cayetana. NPR for Wavves, Title Fight and Waxahatchee. The list goes on.

It's easy to see what made "pop punk" such a turnoff as it became progressively more mainstream in the '90s and early '00s. "Punk" is a genre with a code of ethics that punk fans feel should be kept sacred, and "pop" is basically the antithesis of those ethics. So "pop punk" is theoretically the worst thing that could ever happen to punk. Indie rock fans adhere to similar ethics, so when "What's My Age Again?" hit TRL, it's no surprise that Sebadoh fans weren't gluing their eyes to their TVs.

But for a younger generation, some combination of Green Day, The Offspring, Rancid, blink-182 and New Found Glory (or all of the above) was a foundational listening experience, and an entry point into alternative music. Those bands may have made punk more mainstream, but they were also gateways to older and more universally canonized artists. blink-182 directly led to Descendents, Dinosaur Jr and Drive Like Jehu; Green Day to Husker Du; Rancid to Roger Miret and Sham 69; New Found Glory to Lifetime and Gorilla Biscuits; and so on. The people who grew up on those bands are becoming today's indie rock musicians, fans, and critics, so it makes sense that the sounds of pop punk are making their way into indie rock. Not to mention Best Coast, who started as a lo-fi band on Mexican Summer, went on to cover blink-182, collaborate with New Found Glory, and tour with Green Day. 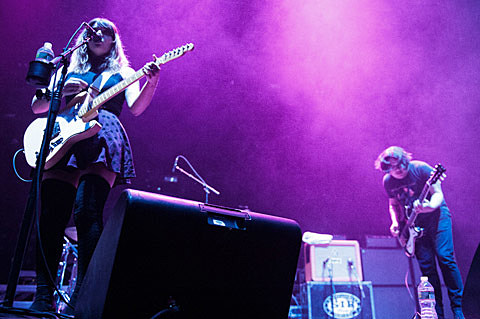 Right now, the amount of bands blurring the lines between indie rock and pop punk is pretty astounding. We saw pop punk's influence sneak into indie rock on a handful of our favorite records of last year, and this year we have great records from Colleen Green, Bully, Superheaven, Turnover, All Dogs, Radioactivity, Royal Headache, Titus Andronicus, Worriers, Hop Along and Adventures that all fit the description.

Even with this huge influx of indie rock bands taking influence from pop punk, it's not hard to see why there's still resistance against the "pop punk" tag. The kind of over-produced pop punk that critics cringed at in the early 2000s is still very popular. All Time Low's new album debuted at #2 on Billboard this year and there's nothing "punk" about this. 5 Seconds of Summer may be the biggest band in the world right now that anyone is calling "pop punk," but they also share management with One Direction, have toured with them, and are closer in sound to 1D than to any band who ever signed a contract with Fat Wreck Chords. If 5SOS can be called pop punk, or apparently anyone who plays Warped Tour -- like Front Porch Step, who in addition to his questionable actions, makes cringe-worthy music that has nothing to do with pop punk -- it's understandable why some people want to avoid the term.

There's also a group of bands who frequently play Warped Tour and not only warrant being called pop punk, but pride themselves on it: bands like Man Overboard, The Story So Far, Four Year Strong, Neck Deep and State Champs. Their approach is basically to take the moment pop punk took over the world and recreate it. (The Drive-Thru Records catalog is a big influence here.) They're not shy about their style -- Man Overboard make shirts that say "Defend Pop Punk" and Neck Deep make ones that say "Generic Pop Punk." They don't seem to be after hugely mainstream success and tend to build their fanbases like punk bands do, but to our ears they're usually unoriginal at best and still kinda cheesy at worst.

If you have any place in your heart for early 2000s-era mainstream pop punk though (and if you've read this far, you probably do), there's one band I think is doing a hell of a lot of justice to it: The Wonder Years. Unlike the bands bringing pop punk's influence into indie rock, The Wonder Years are making the kind of pop punk that is in fact pop music, but they also happen to make really fucking good pop music. It's becoming more prevalent for critics and "serious music fans" to discuss great pop music, and this is a good thing because great music can truly come from anywhere. The recent Beyonce and Justin Timberlake albums were steps forward for music in general, whether or not you normally listen to the radio. A lot of fans and critics noted that, but for whatever reason there's still a stigma when it comes to pop punk. You're more likely to see certain critics champion Fifth Harmony, a new teen-pop group formed by Simon Cowell on The X Factor, than even mention the latest Bad Religion or Rancid albums. It's a stigma that hopefully disappears, because The Wonder Years don't deserve to be ignored by any serious music fan.

photo: The Wonder Years at House of Vans in 2011 (more by Andrew St. Clair) 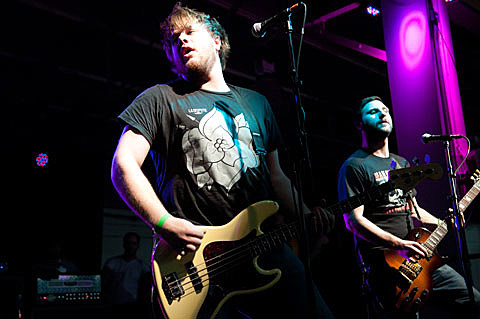 The Wonder Years started out as more of a generic pop punk band, and while in hindsight I respect the people who knew they were great from day one (or at least since their 2010 breakthrough The Upsides), they didn't really catch my ear until 2011's Suburbia I've Given You All and Now I'm Nothing. And it didn't really click until 2013's The Greatest Generation, which might be the greatest true-blue radio-ready pop punk record since Enema of the State. It probably owes more to New Found Glory and The Starting Line than it does to blink-182, but even if those bands have proved to be more influential, they never had this level of songwriting or maturity. Even on New Found Glory's "mature" album, they couldn't escape writing songs about girls who "smell like angels ought to smell." The Greatest Generation grapples with hitting your mid-to-late '20s, seeing your friends and cousins getting married and transitioning into adulthood, and thinking "did I fuck up?" When they do sound like they're singing about high school crushes ("I hadn't felt a heartbreak until now") you quickly realize they're singing about the death of a friend.

It's close to an absolute perfection of its form, and it's hard to say just yet if they've topped it, though they've undoubtedly made another artistic leap on the new No Closer to Heaven. It's the band's most overwhelmingly emotional album yet, and the most musically diverse too. In 45 minutes it touches on double-time pop punk, slower atmospheric songs, heavy rock riffs, and an acoustic song to close things out. It's the kind of record that might piss off some old fans and cause them to say The Wonder Years "aren't pop punk anymore," but it might win over a bunch of new fans in the process. It's pop punk's Sunbather. The thing is though, unlike say Title Fight's trek into atmospheric rock, this is a pop punk album. It pushes the boundaries of the genre about as far as they can go without losing the type of thrill you specifically get from this style of music. Really it shouldn't piss off old fans because it manages to retain the sound they've always had while clearly pushing it forward.

It makes me think a lot of Brand New's The Devil and God Are Raging Inside Me. It doesn't sound like Devil and God, but that was the moment Brand New made a devastating, cathartic album that defied its genre without abandoning it, and that's what TWY do here. They're also similar to Brand New in that each record is a shift from the last, and that people (rightfully) worship these guys. To compare it to an album it does sound like, it's actually a little like The Hotelier's last one, and that may be the most acclaimed album the entire emo revival has given us. But it feels a little unfair to compare those two, because The Hotelier are a young (yet fully-formed) band and No Closer to Heaven is clearly the work of seasoned songwriters.

The Wonder Years are more dynamically diverse here than ever. They know just when to switch from a chorus turned up to 11 to a bridge of clean guitar arpeggios and back again. They know which lyric needs a three-part harmony, which needs frontman Dan "Soupy" Campbell to sing gently and which needs him at the top of his lungs. At least half the songs completely avoid the standard verse-chorus-verse. Recurring lyrics and themes throughout an album aren't new ground for The Wonder Years, but No Closer to Heaven might be the closest they've come to a true concept album. Death, if it wasn't obvious, is that concept here. The lyric we hear over and over is "We're no saviors if we can't save our brothers," and that's only one of the instantly-quotable lines packed into this thing. There's a harsh reality to Soupy's lyrics this time around, and when he brings his voice to a shout it feels more like a reflex than an artistic decision.

Like the last record, his melodies are familiar without being predictable. Thanks in part to the fact that almost every member can sing, they've mastered the kind of multi-part harmonies and overlapping vocals that most of their peers aren't even attempting. (My only complaint about the new album is the guest vocals from the singer of letlive. who come too close to a maligned genre I won't defend, nu-metal.) The production is once again shining with gloss, but nothing sounds artificial -- unlike many of their peers, the band and longtime producer Steve Evetts (who has helmed other pop punk classics like Jersey's Best Dancers and Through Being Cool) have long discussed avoiding auto-tune and sample replacing. The interplay between the band's three guitarists also make this far more detailed than punk's "learn three power chords, form a band" mentality. But The Wonder Years do stay true to the latter half of the phrase "pop punk," and if you've seen them live you know this. They typically fill big rooms these days, but they still play like they came out swinging from a South Philly basement. They might not win over a snobby punk purist, but for the genre-hopping listener who finds emotional depth and musical ambition in both the new Drake and the new Sufjan Stevens, you may find it in the new Wonder Years too. 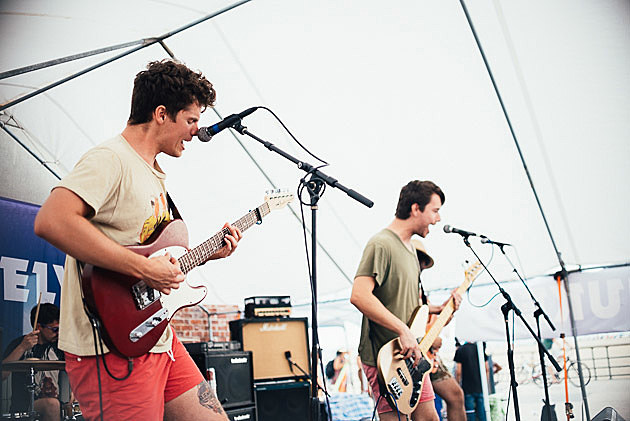 No Closer to Heaven is out today via Hopeless (order yours) and you can stream the whole thing via Rdio, below.

They'll be on tour this year with another unique pop punk band, Motion City Soundtrack, emo revival darlings You Blew It!, and State Champs. That tour hits NYC for two Webster Hall shows in October, but first TWY play an acoustic in-store at Rough Trade on Wednesday (9/9).