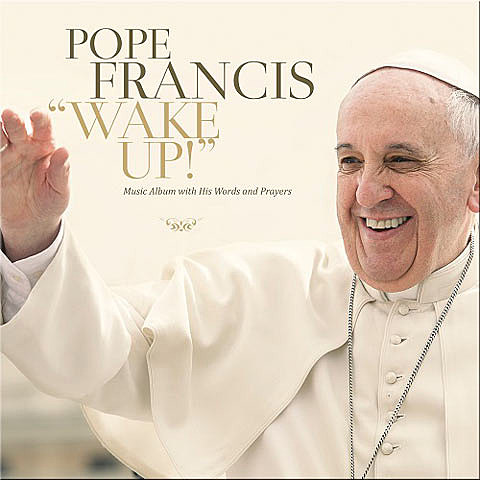 As you may have heard, Pope Francis is in NYC right now delighting followers and annoying grumpy commuters all over the city. What you may not have heard is that Pope Francis is releasing a pop album. Kind of. It's titled Wake Up! and features "the sacred hymns of the musical Christian tradition reworked by contemporary composers with extracts from Pope Francis' speeches." Spoken in four languages, the music is equally global, with songs ranging from pop, rock and Latin music to Gregorian chants. You can get a taste via "Wake Up! Go! Go! Forward!" which is in anthemic, arena-rock mode. Listen, and check out the Wake Up! tracklist (and its many contributors), below. The LP's out November 27.

The Pope's mass at MSG happens tonight (9/25), part of his North American tour.

8 - "La fe es entera, no se licua!" (4:32) - Extract Of Speech in Spanish.
Speech on the occasion of the meeting with young people from Argentina at the Cathedral of St. Sebastian in Rio De Janeiro - Brazil (25th July 2013)
Music Track: Vexilla regis prodeunt

11 - "Fazei o que Ele vos disser!" (3:31) - Extracts Of Speeches in Portuguese and Italian.
Homily during the Holy Mass in the Basilica of the Shrine of "Our Lady of the Concemption of Aparecida" - Brazil (24th July 2013)
Music Track: Ave Maris Stella