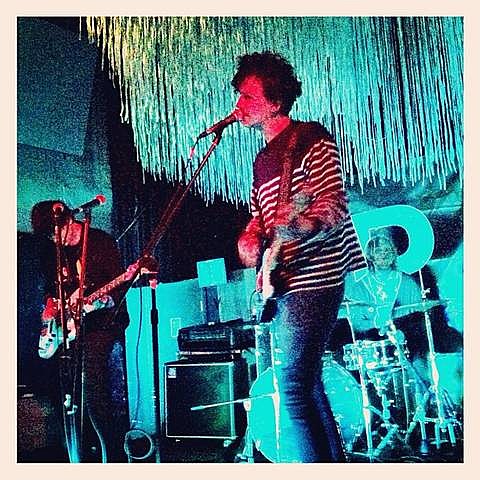 New Zealand's Popstrangers played a few shows during CMJ, inclcluding the Carpark/Paw Tracks showcase at Cameo on Thursday (10/18) which I stopped at briefly. The trio bring the noise, making a racket not unlike their NZ indie ancestors 3D's, all buzzsaw guitars, manic drumming and distorted, flinty bass. The band are still in town and will play Pianos tonight (10/23) with Majical Cloudz, Archie Powell & the Exports and advance tickets are available.

Carpark will release Popstrangers debut album, Antipodes, on February 26. The first single from the album, "Heaven," can be streamed below.

Also on the bill, as you may have seen, is Montreal's Majical Cloudz who are signed to Arbutus Records, who toured the UK with Grimes last month, and contributed to Grimes' album, Visions. They played the Arbutus party at Death by Audio on Friday (10/20), maybe you saw them then. You can stream a couple tracks below.