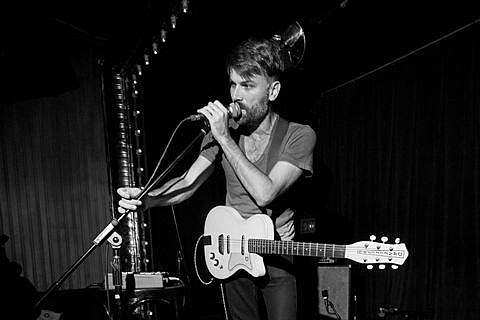 As mentioned, Porcelain Raft is releasing his debut LP, Strange Weekend, on January 24 via Secretly Canadian, and kicking off a long tour next week in support of it, which includes dates with M83 and a Webster Hall show on January 31 with Smith Westerns and Bleached. Tickets for the Webster Hall show are still on sale.

Before the tour starts, he'll play a NYC show at Cameo Gallery on Wednesday (1/11) with My Best Fiend (who is playing second) and Crinkles (who is headlining). No openers have been announced yet and there are no advance tickets.

Though Strange Weekend is Porcelain Raft's first full length, he's put out a number of releases over the past two years (including the Gone Blind EP) and the album feels like the culminating statement of all of the material he has been working on. Like on his earlier EPs, he's bringing in a lot of sounds to Strange Weekend, but ultimately determined to keep the sound small. When gentle acoustic guitars come in over synths and beats, and subtle effects wash over his slightly Dan Bejar-ish voice, it sounds like a complete work, yet never tries to escape the confines of his bedroom walls. The Lennon-esque approach to dream pop taken here is hard not to compare to the most recent Atlas Sound album, and fans of that album will likely find something of interest in Strange Weekend. The video for the first single "Put Me to Sleep" and a stream for the new single, "Unless You Speak From Your Heart," are both below.

Updated dates, video, and stream below...