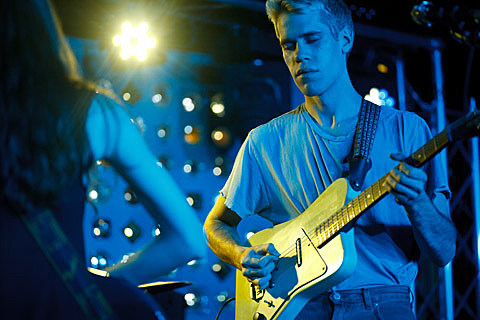 Related bands Porches and Frankie Cosmos did a sold-out 2-night run at Baby's All Right together this past October, and now they're making the move up to Bowery Ballroom on February 6. Opening the show is Porches' former Exploding In Sound labelmates Krill and Philly rockers Sheer Mag. Tickets go on sale noon on Friday (12/5).

Meanwhile, as discussed you can catch Porches sooner and somewhere smaller on December 12 at Palisades with LVL UP, What Moon Things and Cantina (tickets). You can also catch Frankie Cosmos solo and Ronald Paris (aka Porches singer Aaron Maine) at The Studio at Webster Hall on December 17. That show is with pop singer Wynter Gordon, and a collaborative set from Tasseomancy (led by Austra's former backup singers) and Steven Reker. Tickets are on sale now. Porches also have a new record coming and have been posting teasers on their Facebook.

Krill, who will be celebrating a new LP at the Bowery Ballroom show, also have a few dates coming up this week. One of those is in Brooklyn on Friday (12/5) at David Blaine's The Steakhouse (1131 Myrtle Ave) with The Spirit of the Beehive, Downies, Slight and Glueboy. That's $5 at the door. All of their dates are listed below.

Sheer Mag have a couple other dates coming up too. They play Brooklyn on January 2 at Saint Vitus with Sick Thoughts, Casanovas In Heat and Tapehead. No advance tickets at the moment. They also open for Parquet Courts in Philly in February. If you haven't heard their recent 7" you can check that out below.

What Moon Things, who are on Porches' Palisades show, also play NYC tonight (12/3) at Shea Stadium with Pinegrove, Youth Worship (mem Asobi Seksu) and Railings ($8 at door). As discussed, they also play a final Glasslands (12/20) show with Widowspeak. Since we last spoke, Quilt were added to that too. Tickets are still available.

All lists of dates and some videos/song streams below...