Porches at Baby's in January (more by Amanda Hatfield) 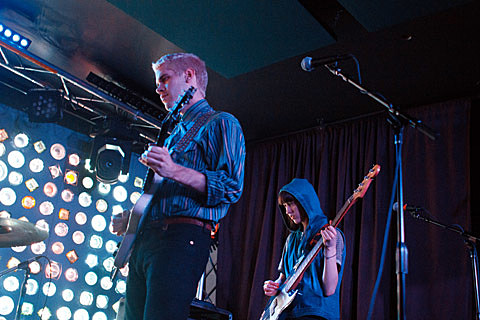 NYC "bummer pop" band Porches rarely have a lack of local shows, and that's no different this month into next, though they'll be gone for about half of March on tour (surprisingly not for SXSW though). Before leaving home, Porches play the previously discussed Brooklyn Night Bazaar show this Friday (2/21) with Jessica Pratt and Widowspeak. After that, they'll play Baby's All Right on March 1 with Frankie Cosmos (who's in Porches' live band and Porches singer Aaron Maine is in Frankie's) and DRGN King (tickets). They also play a tour kickoff at Shea Stadium on March 13. All dates are listed below.

Meanwhile, Frankie Cosmos plays a release show for her first full band album, Zentropy (due out 3/4 via Double Double Whammy), on March 8 at Shea Stadium with Whatever Dad, Ruby Buff and Spook Houses. Since we last spoke, she released two more songs from the new album, "Birthday Song" and "My I Love You," which you can listen to below.

Porches also recently filmed an acoustic video for "Pwrls." You can watch that, along with the list of dates and the Frankie Cosmos song, below...

Frankie Cosmos - "My I Love You"