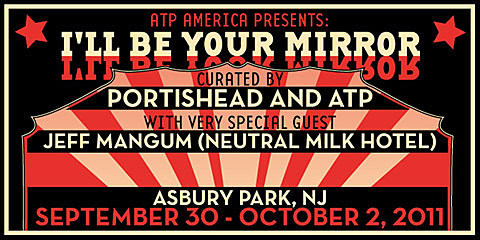 For those of you who were wondering if ATP New York was returning to the kitschy resort that is Kutschers, the bad news is that it won't. The good news? All Tomorrow's Parties is instead headed to one of the kitschiest towns in New Jersey this fall, and "American I'll Be Your Mirror" will begin its inaugural year with a BANG!

ATP, who are curating on the Friday are also very excited to be able to present Jeff Mangum who on the Friday night will perform his first large public show of Neutral Milk Hotel songs in over a decade.... Please note, as Jeff has chosen to play in the stunning, but smaller Paramount theatre only people who buy 3 day festival passes get access to this show on Friday night.

Also playing on the Friday are Chavez, Shellac, Cults and The Album Leaf, with a headliner and some comedians to be confirmed. The rest of the line-ups for the Saturday and Sunday will be announced in the near future.

I'll Be Your Mirror is a new series of artist curated music, film and art events. Acting as sister events to the ATP Festivals, which take place in holiday resorts, I'll Be Your Mirror retains the curatorial and multiple band and film concept, but will take place in cities worldwide. The events are named after the b-side to The Velvet Underground's original All Tomorrow's Parties 7" single, released in 1966.

Everyone who came to our three events at Kutshers knows how special the place was and how lucky they were to have been a part of our events there and while we are sad to not be returning, we are excited to be moving to the iconic Asbury Park. The Convention Hall has seen the likes of Black Sabbath, Led Zeppelin, The Doors, The Beach Boys and The Rolling Stones grace its stage and the Paramount Theatre has welcomed stars such as Tony Bennett who often insists on playing a song with all the electrics turned off to demonstrate the amazing acoustics of the room.

We will be transporting the whole ATP experience over to this new location on the beach at Asbury Park, with the main shows taking place at the Convention Hall and Paramount Theatre, as well as the nearby Asbury Lanes and the Berkeley hotel, which the man in black, Johnny Cash himself once lived at. We think it will make a stunning successor to Kutshers.

As well as the live music line-up of over 30 acts across the weekend, Friday will feature a Comedy stage, and we're very pleased to announce that our friends at Criterion will return again to run the Cinema across the weekend. All three days will also feature DJs and other activities to be confirmed in the months ahead - we'll also be bringing back some of our popular food vendors including the much loved Asia Dogs, and much, much more. Performances all take place indoors, so you have no need to fear about the weather!

I'll Be Your Mirror will take place from Sept 30 - Oct 2, 2011. Jeff Mangum will ALSO perform a separate show on Monday, Oct 3rd at Paramount Theater. 3 DAY PASSES, DAY PASSES AND JEFF MANGUM (Monday) TICKETS GO ON SALE THIS FRIDAY AT 9AM EST FROM SEETICKETS & TICKETMASTER via www.atpfestival.com.

Most exciting news ever?

BBG, an ATP NY veteran, in a moment of excitement adds:

This announcement is one big "holy shit" on many levels.
1) Hello Asbury Park, NJ!
2) One of the best things about ATP New York was the "music camp" atmosphere at Kutshers. How will Berkeley Hotel fare?
3) Neutral Milk Hotel!!!
4) Portishead!!!
5) Neutral Milk Hotel again!
6) Portishead again, but maybe not?

Confused by point #6? Well, "Limited 3 Day Passes are available at $249 - these include access to the Jeff Mangum Friday show and the choice of being guaranteed to see Portishead on Saturday or Sunday." More details (including ticket and transportation options) below:

Friday Day Passes are $60 - they do not include the Jeff Mangum show in the Paramount but include everything else on that day.

Friday day passes do not include Jeff Mangum's show as explained above. Jeff Mangum will play a separate solo headline show on the Monday night, tickets for which are $35.

3 DAY PASSES, DAY PASSES AND JEFF MANGUM (Monday) TICKETS GO ON SALE THIS FRIDAY AT 9AM EST FROM SEETICKETS & TICKETMASTER via www.atpfestival.com

Asbury Park has a wide variety of accommodation options some of which are listed on our website. The Berkeley Hotel where we will host the Cinema and DJs has some rooms available to ATP members and past attendees. If you think you are eligible to enquire about a room at the Berkeley email us at feedback@atpfestival.com with BERKELEY in the subject line.

Trains: Asbury Park station is an easy train journey from New York Penn station - trains run back to NYC until just after midnight and start again at 5am the next morning. Trains run direct from Newark International Airport down the North Jersey Coastline to Asbury Park. Check the New Jersey Transit website for more info on connections to other areas of New York and New Jersey: http://www.njtransit.com ATP will operate shuttle buses from Asbury Park station to the main venues and back.