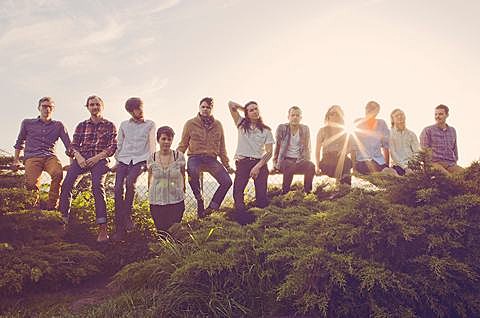 Typhoon is Portland songwriter Kyle Morton and his 11-piece touring band, which includes a horn and string sections, two drummers. The group's new LP, White Lighter, is a catchy, folky collection of songs that has echoes of Illinoise-era Sufjan, Modest Mouse and maybe a little Beirut.

The collective is on tour currently (they raised $60,000 via Kickstarter over the summer for a new van) with fellow Portland band Radiation City: They're in Chicago tonight, and hit NYC with shows at Littlefield on September 28 (sold-out) and Le Poisson Rouge on September 30. Tickets for LPR are on sale now.

All tour dates are listed, along with a stream of their song "Young Fathers," below...