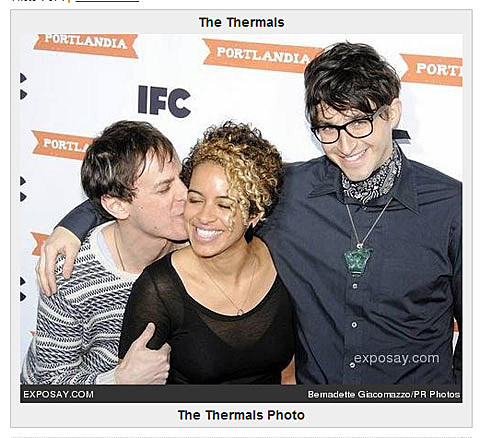 Tonight, Friday, 1/28, Iron & Wine are playing a free show at the Apple Store in SoHo. On Monday (January 31 at 7pm), Carrie Brownstein & Fred Armisen will discuss their IFC TV show Portlandia, live, at the same location. Meanwhile you can catch Portlandia three times today on IFC, including at 10:30pm.

Carrie Brownstein's band Wild Flag is playing two now-sold-out shows in Brooklyn in March (and other dates). Catch Fred Armisen on SNL this Saturday, 1/29, with musical guest Nicki Minaj (who recently announced a tour with Lil Wayne who was on SNL not that long ago)

That picture above shows Portland band the Thermals (who play a show in Portland tonight) arriving at the Portlandia premiere party in NYC last week. The band performed at the event, though unlike some members of the Decemberists, I'm not sure if the Thermals actually get any screen time in one of the upcoming shows. Carrie Brownstein however, as you might remember, gets some screen time in the recent Thermals video for "I Don't Believe You" which is the same song the Thermals will be performing on February 1st on 'Lopez Tonight'. The song comes from the band's 5th LP Personal Life, as does the song "Never Listen to Me" which now also has a video, which you can watch with other stuff, below...

--
The Thermals - I Don't Believe You starring Carrie Brownstein

Portlandia: Dream of the 90s