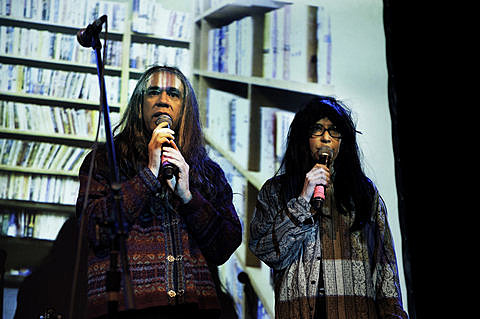 Fred Armisen (SNL, Ian Rubbish) and Carrie Brownstein's (Sleater-Kinney, Wild Flag) quirky IFC comedy Portlandia is returning for its fourth season on February 27, but ahead of that, you can get a sneak peek of the new season over at Entertainment Weekly. EW also points out that this season's celebrity guests include Kirsten Dunst, Maya Rudolph, Olivia Wilde, Vanessa Bayer, k.d. Lang, and Wilco's Jeff Tweedy, and previous guests Steve Buscemi, Jason Sudekis, Kyle MacLachlan and Jeff Goldblum will return.

Right before the new season airs, Fred and Carrie will make their way to NYC for "A Conversation with Fred Armisen and Carrie Brownstein" at 92Y on February 25. Tickets are on sale now.

In related news, Drag City is releasing a series of 7" of the many fictional bands Armisen was a part of on Saturday Night Live. The first of these will be released on February 18 and features Blue Jean Committee's "Massachusetts Afternoon" (originally on a 2011 episode hosted by Jason Segel) on one side and and the pseudo-synthpop group Fingerlings' "Embrace Me" (from the 2011 Dana Carvey episode) on the flip. You can check out The Fingerlings' sketch below...