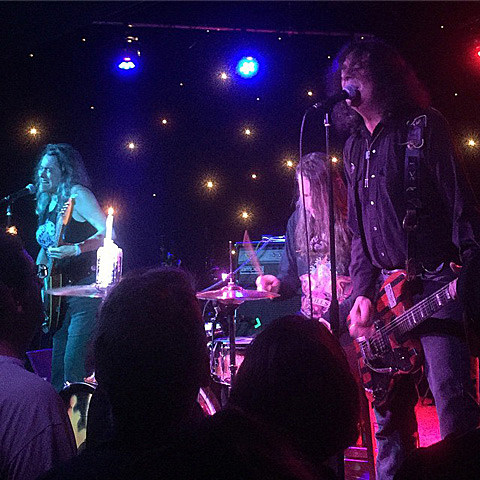 Portland garage punk legends Dead Moon, who existed from 1987 - 2006, are back in action with Fred & Toody Cole, plus drummer Andrew Loomis all returning. (Glad to see Fred recovering from last year's heart surgery.) They played Saturday (3/14) for the reopening of Seattle club Chop Suey. KEXP was there:

Portland's gritty 70's punk rockers Dead Moon did not disappoint in their return to the stage. Their relentless whining guitar and slow cool bass were as fuzzy and intact as ever. Fred and Toody Cole and Andrew Loomis wore their adventures from their infamous days of beer and whiskey stained dingy clubs like a badge of honor. In the old days, they sold out clubs to kids who couldn't get enough of their simple, haunting lyrics, and they sold out Chop Suey just as easily. Halfway through their set, the ultimate redeeming ballad of "It's O.K." rang out with the nostalgic perfection of a youth lived and lost, and crowd members rushed forward, moshing and screaming lyrics at the top of their lungs. Watching Toody and Fred continue to remind today's listeners that "it's okay" secures their timeless ballad as a cult punk necessity. Dead Moon are known for their full tilt performances, where the drums are hard and sparse, the guitar is a metal beast, the bass keeps you grounded, and the shrieking vocals make you want to spit your own call to arms.

You can watch video of Dead Moon playing "Johnny's Got A Gun" and "Walking on My Grave" from the Chop Suey show below.

While Dead Moon haven't announced a full tour (they didn't live the Pacific Northwest all that often back in the day), they do have a couple other shows lined up including one in NYC, playing Red Hook's Pioneer Works on June 20 with J Mascis, Borbetomagus, and Das Audit. Tickets are on sale now.