Portraits of Past circa 1994 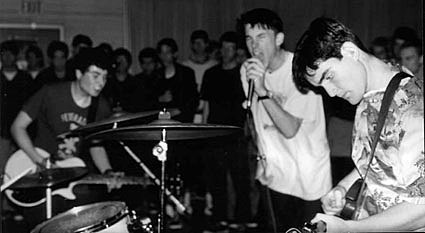 Before screamo was a filthy word, the fallen but celebrated pioneers Portraits of Past were blazing a trail and leaving a small but compelling legacy in their wake. Thirteen years after calling it a day, Portraits Of Past have re-emerged to play a few select shows including a pair on the east coast: at Death By Audio on Friday Aug 29th and Cake Shop on Saturday August 30th. The band will be performing their entire 010101010 LP, which was recently compiled with five live tracks and the rest of their recorded output (except for their track from the Stealing the Pocket LP compilation which "has been lost") on their Discography, out now on Ebullition Records. Pick it up here.

Both NYC shows will be supported by Ampere which features guitarist Will Killingsworth of the late great Orchid. Ampere has several songs streaming at their myspace. In 2006 Ampere dropped a split LP with Sinaloa, who recently dropped Oceans of Islands on Level Plane. Check out "Seek Harbor" above.

Tropic of Nelson is also on the bill at Death by Audio, and will play NYC again two days later with a pair of ex-Don Caballero bands, The Poison Arrows and Knot Feeder.

Earlier this month Portraits of Past played San Francisco and Berkeley. Video from one of those shows below.