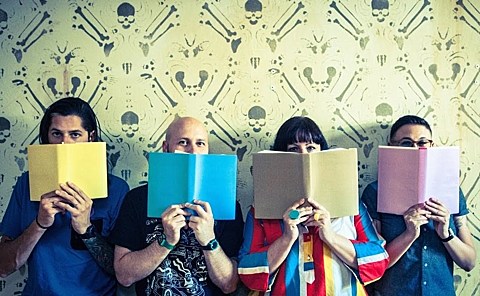 Back in the mi-'90s, Tracy Wilson sang for the emo/post-hardcore band Dahlia Seed who put out two full lengths (and other singles/splits/etc) including their 1995 debut, Valentine Kid's Litter, which holds up pretty well today. After that, she put out solo material as Ringfinger and now she's fronting the band Positive No. They teamed up with another '90s post-hardcore vet, J. Robbins, to produce their debut full length, Glossa, and going by the couple tracks we've heard it certainly sounds like the work of '90s-era musicians. NPR debuted lead single "Pedal Through" and wrote:

After a couple singles and an EP, Positive No's debut album, Glossa, undeniably comes from the '90s, with an ear for counter-intuitive melodies that pop in unexpected places. "Pedal Through," in particular, has all the beefy weirdness of Polvo -- but is, in the end, a winsome pop song that gets stuck in your head for days.

We've got the premiere of the second single, "Weird Hugs," which could be described just about the same way (if a bit shoutier). The record will be out September 18 via Negative Fun / Little Black Clouds (click the links to pre-order), and you can stream those two singles now, below. And if you aren't already familiar, check out a stream of Valentine Kid's Litter below too.