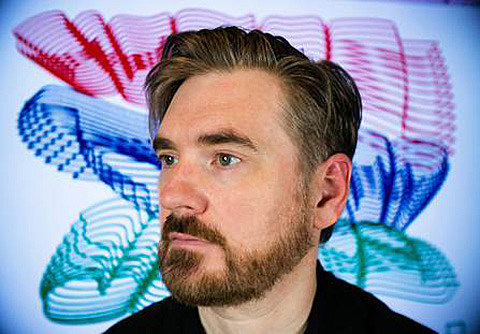 Rick Valentin is an indie rock survivor, having logged extensive time in both college radio staples Poster Children, and its electronic postrock offshoot Salaryman. (Both of which are still active.) His rock and synth sides merge for Valentin's solo project, Thoughts Detecting Machines. Says Rick:

When I started Thoughts Detecting Machines, I hadn't written a song by myself in 20 years. I tried to do the singer-songwriter thing, but writing songs on an acoustic guitar made no sense to me. There's just not enough volume.

Following an EP in 2013, TDM's debut album, Work the Circuits, is out next month and we've got the premiere of dark, brooding "Night for Day" which you can listen to, along with another song off the album, below.

Vinyl copies of Work the Circuits are packaged in a one-of-a-kind jacket created with a pen plotter built and programmed by Valentin:

I love the pen plotter. It has the exactitude of a computer with uniform curves and lines but there are also imperfections. Blobs of color where the pen first sets down, ink bleeding into the paper and gaps and overlaps where the servos don't quite guide the pen to the right location on the page. It's like the music - a collision of digital and analog, the perfect and imperfect.

Thoughts Detecting Machines' Work the Circuits will be out March 16. Pre-orders are being taken. Song streams below.