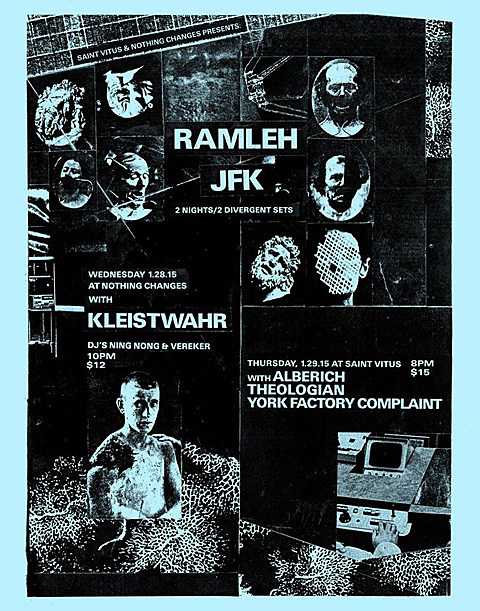 When Gary Mundy formed Ramleh and the Broken Flag label in 1982, he was a primary participant in the UK power electronics scene, which attempted to outdo the industrial template first drawn by Throbbing Gristle. Very much a product of their time, his recordings were violent sonic bursts laced with proto-fascist and misogynist imagery, given vulgar titles meant to shock. Mundy and co-conspirator Philip Best quickly rose from this noise ghetto by applying the scene's best aspects (experimentation, improvisation, volume) to a more traditional rock format. Along with its sister group Skullflower, Ramleh laid the foundations for improvisational noise rock with a stubborn intensity that catered to no one. The band rarely issued records in quantities greater than 500, live shows were few and far between and cover art and liner notes were filled with cryptic drawings, photographs and abstract writings. Their sound remained reliably rooted in an unwavering formula: plodding heavy drums, an endlessly repetitive low-end bass groove and wave upon wave of guitar screech. - [Trouser Press]

British power electronics and noise rock pioneers Ramleh, who are currently Anthony di Franco, Gary Mundy, and Martyn Watts, will be playing two rare NYC shows in NYC in early 2015: January 28 at Home Sweet Home for Nothing Changes with JFK and Kleistwahr, and then January 29 at Saint Vitus with JFK, Alberich, Theologian, and York Factory Complaint. Ramleh are promising each night wil completely different, divergent sets. Tickets to both shows go on sale Monday (11/3) at noon.

JFK is one of Anthony di Franco's solo projects, and Kleistwahr is the solo moniker of Gary Mundy. The three local acts on the VItus show fit the bill well too, and you can also catch Alberich at the same venue on 11/6 (tickets). These are Ramleh's only North American dates that we know of. A few Ramleh streams below...