the pavement outside Summerstage in 2008 (more by Ryan Muir) 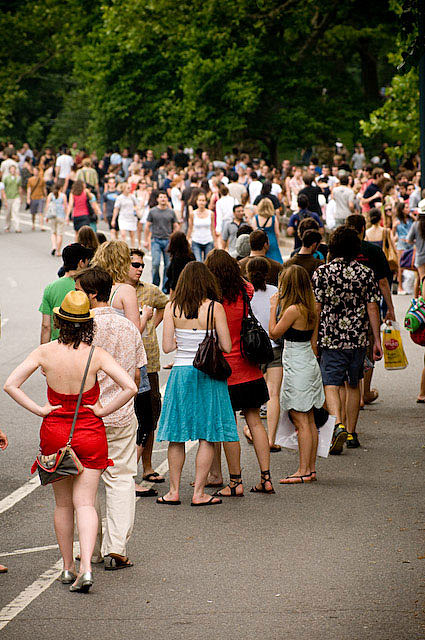 Typically for Pavement, the decision to get back together was made in a lackadaisical way. Says [Scott "Spiral Stairs" Kannberg], "Steve [Malkmus] and I just had a conversation on the phone, and we'd never talked about it before at all. We've talked over the years, but the subject never came up. Then our agent asked us about these New York shows, so we went around to everybody in the band, and they said, 'Yeah, the time is right. If everybody's ready to do it, then we'll do it and see what happens.' There was no real impetus -- it just kind of happened naturally."

Right now, there's only one gig booked, a benefit at Central Park Summerstage on September 21, 2010. Says Kannberg, "We'll do some rehearsing in the new year. The Central Park shows, we'll probably end up doing one or two of those. There's festivals and stuff that we're talking to, like Coachella. After that, anything that happens in the future is in the future." [Rolling Stone]

Tickets for the September 21st, 2010 Pavement show at Rumsey Playfield in Central Park (otherwise known as Central Park Summerstage) are on pre-sale (at 10:00 AM) (password - ZOWEE).

UPDATE: a 2nd show was added after this pre-sale sold right out.