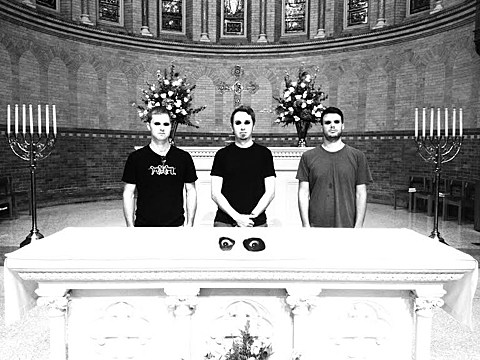 Former tUnE-yArDs sax-player Matt Nelson has been doing a bunch of stuff on his own since leaving that band, and he now has a new project called Premature Burial. The band, named after an Edgar Allen Poe story, plays weird, somewhat scary experimental instrumental music. They call it "electro-acoustic chamber doom music," which seems basically appropriate, as the slow-burning soundscapes on their new record run the gamut from ethereal to crushing. Aforementioned new record is called The Conjuring, and it is out now via New Atlantis. In the words of the label:

Comprised of Peter Evans, Matt Nelson, and Dan Peck, all three members use varying degrees of amplification; Evans presses up against a close mic at times while Nelson and Peck have a full array of effects pedals at their disposal. Combining a vast dynamic spectrum and versatility of form, the resulting pieces range from the sound of softly scurrying rats to pitch-shifted loon-calls from Hell.

Premature Burial has a release show coming up at Secret Project Robot on 12/10, where they'll be joined by local metal band Child Abuse, along with Glockabelle and Aaron Burnett, which should make for a fun, varied bill. Tickets are at the door.

We have the premiere of Premature Burial's new video for the song "Instant Death," which you can watch below, along with a stream of The Conjuring.