UPDATE: This post was mostly about Sunday. Monday's cancellations HERE. 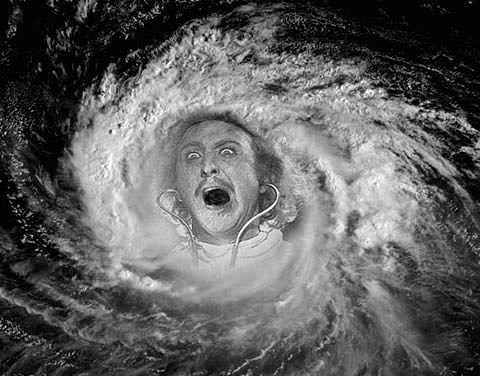 We'll keep you posted, but at the moment, Swans @ Bowery, Sic Alps @ Knitting Factory, and the show at Cake Shop are still listed as happening. Most other Sunday night shows (and a bunch of Monday shows) we would have listed are cancelled or postponed due to Frankenstorm (Hurricane Sandy). Subways and buses stop running at 7pm which is also when people living in "Zone A" are supposed to be evacuated by.

UPDATE: The Juan Maclean's DJ set at Le Bain is also still on (as of this post) CANCELLED too.

Union Pool doesn't have a show tonight, but is open.

ASPCA reminds you: All pets are accepted on the subway, taxi and trains during evacuation.

Fontana's says, "Hey everyone - we're going to be open this evening till we can. At least 2am. All Manhattanites workin the shifts - come keep us company."

The Living Room is closed.

Cake Shop's show is now cancelled, but they "might still be open upstairs for fun and the bored-at-home-with-only-comic-books-you-haven't-read-yet-from-the-early-2000's. Stay tuned."

Spectre Folk, who were set to open for Sic Alps, at Knitting Factory tonight "have cancelled due to weather related travel issues. The show will go on with Sic Alps and PC Worship but will end early (10pm)." Tickets are still available.

Hannibal Buress is stuck in Houston. Not sure if his Knitting Factory show is going on without him.

UCB: "Due to MTA shutdown, both ASSSSCAT 3000 shows are cancelled tonight. Refunds will be issued to ticket holders."

All shows past 5:30pm at UCB East are also cancelled.

Pretty Good Friends is cancelled at Union Hall which will also be closed Monday.

Grimes, who has been in NYC the past few nights for her sold out four-night run, was set to play her last of those shows at Music Hall of Williamsburg tonight with Elite Gymnastics and Majical Cloudz, but due to the incoming Frankenstorm, tonight's show has been cancelled. Refunds are available at the point of purchase.

Brooklyn Bowl is closing at 6pm.

The Molly Nilsson show at Glasslands tonight has been cancelled.

The xx were scheduled to play their second of two shows at the Paradise Theater tonight. They write...

Due to safety concerns related to Hurricane Sandy and the MTA shutdown in New York, we have been forced to postpone our remaining shows in New York, Philadelphia and Baltimore, including tonight's show at the Paradise in the Bronx. We are working with our partners to reschedule as soon as possible, so please hang on to your tickets and we'll advise as soon as we can. We'll have another announcement coming later in the week, including information on these shows and a new run of US dates in early 2013. In the meantime, please be safe. We'll be back to see you all soon.

Tonight's Ghostface Killah and Sheek Louch Wu-Block party at Highline Ballroom has been cancelled. Refunds available at point of purchase.

Villains is cancelled at Saint Vitus who write "We are closed this evening due to mandatory evacuation of "zone A". Obviously Mayor Bloomberg is not a Metal Head. We will reopen as soon as we can. In the meantime, enjoy this!"

Child Abuse at The Paper Box is cancelled.

Cat Power's Philly show at the Electric Factory has been postponed to January 2.

Brandie Carlile and Blitzen Trapper were set to play their first of two Beacon Theater shows tonight, but both tonight's show and Monday's show have been postponed.

"Due to impending hurricane, S.O.B's will be closed Monday and Tuesday. Shows will be rescheduled at a later date."

The Trey Anastasio Band show at Capitol Theater has been postponed to Monday, November 5. All tickets for tonight's show will be honored.

Louis CK was set to wrap up his run at the New York City Center tonight but has postponed the shows until March 2. Read his letter about postponing HERE.

"Pace Presents at The Schimmel Center for the Arts is disappointed to announce that, due to the effects of Hurricane Sandy on the city, our 2012 Banjo Summit with BELA FLECK tonight, Sunday October 28, has been CANCELLED. We are currently in discussions with the artists regarding rescheduling this show. More information will be released as we have it. Again, our apologies for any inconvenience this may cause. Stay safe and dry in the storm!"

The Yasiin Bey (fka Mos Def) show at Apollo Theater, which was initially postponed to tonight from June 14, has now been cancelled.

"BAM Rose Cinemas will close today following the 4:40 screening of Argo. The cinemas will remain closed tomorrow and possibly Tuesday."

Maxwell's says, "tonight's show with Ours has been postponed to Sunday, December 2nd. all tickets will be honored and refunds are available as well."

City Winery says, "Due to the inclimate weather in the New York area and the suspension of all major travel services tonight's (10/28/12) Shawn Colvin concert has been cancelled. We apologize for any inconvenience this may cause. The show has been rescheduled for February 3, 2013. In addition the Eric Hutchinson show scheduled for Monday, 10/29/12 has also been cancelled and will be rescheduled for a later date."

If you had been planning on celebrating Halloween with Rusko at Pacha tonight, you'll have to settle for spending New Year's with him. Tonight's show has been postponed until December 30.

UPDATE: This post was mostly about Sunday. Monday's cancellations HERE.