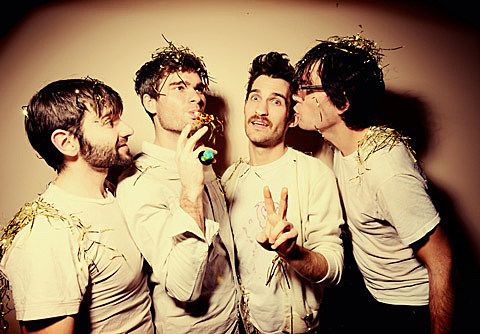 Boston's Pretty & Nice have some good news and some bad news. Which do you want first? (If you've read the headline of this post you may know already.) OK, the bad -- the band are going on "indefinite hiatus" after nine years together. The wrote a nice goodbye letter on their Facebook that is more of the "hey it's been fun" than an "airing of grievances" kind of thing. You can read it below.

The good news is before they fade into hiatus, they'll release a new EP, Infinitely Forever, on August 12. The band's keen melodic abilities and good pop sense are still evident, but the direction is decidedly more electronic this time out. There's a few originals and remixes of previously released songs. We've got the premiere of "Summer Boys" from the EP which you can stream, along with another song from the album, below.

Pretty & Nice will also be playing a couple release/farewell shows around the release: August 14 at Glasslands in NYC, and then a hometown show at Allston, MA's Great Scott on August 16. Tickets for the Glasslands show -- which also features Jacksie, Adult Dude, and Denizen -- are on sale now.

Those track streams and the farewell letter are below....

To Everyone Who is Still Listening:

It is with a single heavy heart that we announce that Pretty & Nice will be taking an indefinite hiatus after the release of Infinitely Forever and our shows 8/14 at Glasslands in Brooklyn, NY and 8/16 at Great Scott in Allston, MA.

Pretty & Nice started in 2005 with two best friends trying to make the music in their heads a reality. Over the 9 years that followed the band has taken many turns, changing songwriters and home cities while amassing a team of nearly a dozen former members. The goal of the band has always been to spread positive energy to everyone with whom we interacted and, in that way, we feel successful.

We've been on countless US tours as well as two unbelievable trips to Europe. Along the way we've met some of the most amazing, inspirational, and helpful people in the world. We couldn't have done any of this without each and every one of you!

To the bands that brought us on tour and let us roll around onstage before them; to the cities that took us in and treated us like we were home; to anyone who let us sleep on their floors, in their guest rooms, and on their couches; to the people who came out and danced and sang and showed us why life is worth living; to the labels who helped us put our music in the hands and ears of the Universe; to the managers and booking agents and promoters who encouraged and assisted us; to the people who stood in the back of the room and then later mentioned to a couple friends that they saw this band that was kind of okay;

Thank you for making it all worthwhile. You're with us and you're a part of this