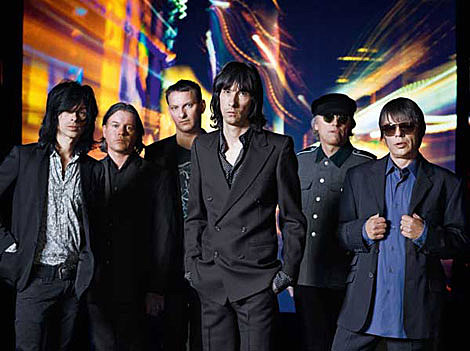 Primal Scream make it really hard to figure out where they are playing. Since my last posting, there are now at least four more confirmed US dates - 2 at SXSW, one in Washington DC, and March 29th at Music Hall of Williamsburg. The new Brooklyn show happens one day after their show at Webster Hall in Manhattan. Tickets are still on sale for Webster Hall, and they go on sale Friday for the Brooklyn show (with the Am Ex presale starting Wednesday at noon)). All North American dates are with Kuroma...

Hank Sullivant, lead and founding member of Kuroma may also be known to some as the founding bass player of Athens, GA band The Whigs and for being a former touring member of MGMT. When asked about the inspiration behind the song "In New York, Everything Is Tropical," Sullivant had this to share, "It came to me in a dream. In my dream I was parasailing and the boat below me was blasting a No Doubt song... but it wasn't an actual No Doubt song, it was this song. I woke up and immediately transcribed the whole thing." The pop sensibilities of this track made it a fitting subject for Rich Travali (Pharrell, Jay-Z, Nas) to put his mixing touch on. Kuroma's overall sound brings together a perfect mix of guitar-driven garage rock and psychedelic pop.

Kuroma also plays Mercury Lounge with Starfucker on April 21st, and Union Hall the next day. All tour dates below...

Kuroma - "In New York, Everything is Tropical"

* with Primal Scream
^ with Brian Jonestown Massacre
+ with Starfucker