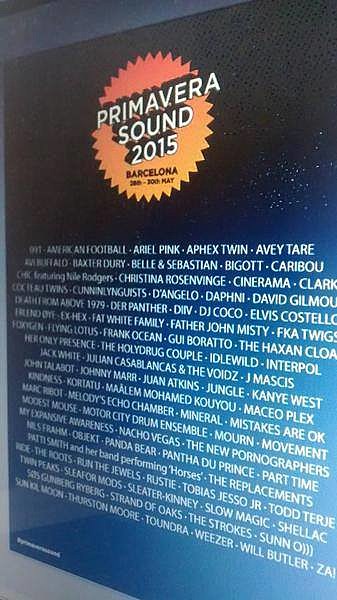 The above photo of an alleged 2015 Primavera Sound music festival lineup is making the rounds. It claims Aphex Twin, who announced a new EP today, will finally take the stage again along with an amazing list of performers. If it's fake, which it probably is, it's a great fake because artist count and "Sleafor Mods" typo aside, it's somewhat believable and would be awesome. Most awesome of all would be the part that says "Cocteau Twins" who broke up in 1997 and haven't been heard from again (though they almost reunited in 2005 but then cancelled it).

Curious, we reached out to Cocteau Twins bassist Simon Raymonde for an answer. We were hoping of course that he would come back and tell us it was true, or that he couldn't comment. We expected him to just flat out deny it. What we got was sort of none of that. Here's what he said:

Really? I'm in the studio producing an album with The Duke Spirit at the moment so not looking at my phone much I'm afraid so I've managed to avoid this particular rumour so far!

There can't be many more bands left to reform can there, so I guess we are ripe for these kinda spoofs? I recently freaked out when I got an alert from my Bandsintown app telling me "Talking Heads are playing soon". It was sadly just a poetry night with the band name as the subtitle for the evening's entertainment. Crushing disappointment. So I can only imagine the potential anxiety level for our lovely loyal fans who will always yearn for our reunion even though they all understand it is as unlikely as a veteran Michael Gira performing a nightly residency at The Aladdin in Las Vegas. (A few of us might pay to see that though!)

Note that he hasn't actually denied it.... Fingers crossed!

Meanwhile, Primavera Sound (which happens May 28-30 in Barcelona) has confirmed that both Ride and The Strokes will be playing. We'll have to wait for the official announcement to find out who else on that poster will really be there.

Simon Raymonde, who continues to run the label Bella Union that he co-founded with Robin Guthrie, released his own music as Snowbird in 2014.

Ride are also playing Coachella and Terminal 5 in NYC.