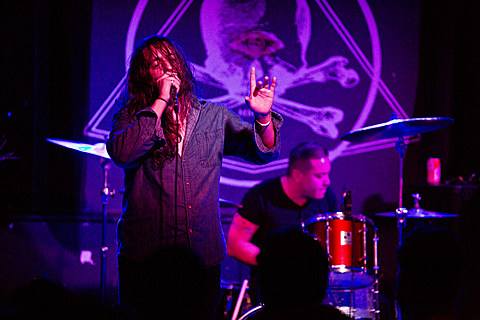 Heavy hardcore locals Primitive Weapons, last seen opening for Refused and at the Bushwick Collective Block Party, are currently on a tour with The Dillinger Escape Plan and Mutoid Man, co-presented by BrooklynVegan. The tour kicked off in DC last night, hits Philly tonight (6/17), Boston on Friday (6/19), and wraps up in NYC on Saturday (6/20) at Irving Plaza.

The band recently put out a video for a new song, "The Electric Drama." The video, directed by Zev Deans, has manipulated black-and-white footage of the band playing Saint Vitus (the venue three members of the band co-own or work at), and the song is a ripper. Check it out below (and look for ex-BrooklynVegan editor Fred Pessaro in the crowd). Their next album, The Future of Death, is due out this fall via PartySmaher Inc. the label/media platform run by Dillinger Escape Plan's Ben Weinman. The record was recorded by Dean Baltulonis (American Nightmare, Hope Conspiracy) at The Wild Arctic Studios in 2014