Primus at Big Day Out in January (more by Chris Graham) 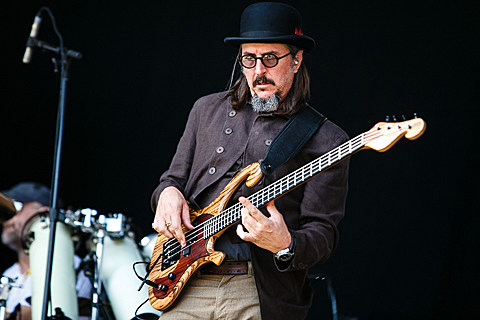 Les Claypool was just in NYC playing three shows with his Duo de Twang, and he's since announced that that other band's he in, Primus, will be hitting the road this May/June. That tour won't bring Les & co. back to NYC, but they'll be nearby for a show in Port Chester at The Capitol Theatre on June 24 and another in Asbury Park at Stone Pony Summerstage on June 28. The Asbury Park show (and a Big Flats, NY show a day earlier) are with The Dean Ween Group, but no other acts announced for the Cap show yet.

Tickets for the Cap show go on sale Friday (3/7) at noon, and you can check Ticketmaster for the general on-sale for the Asbury Park show, but Primus' site says there's a presale on Tuesday (3/4).

Primus are also among the many artists whose music is in True Detective.

One of Les Claypool's Due de Twang shows in NYC was the BrooklynVegan-presented show at Brooklyn Rod & Gun. You've already seen pictures of that one, and now you can check out an audio stream and a video from the show, with the list of Primus dates, below...

Primus at Outside Lands 2008