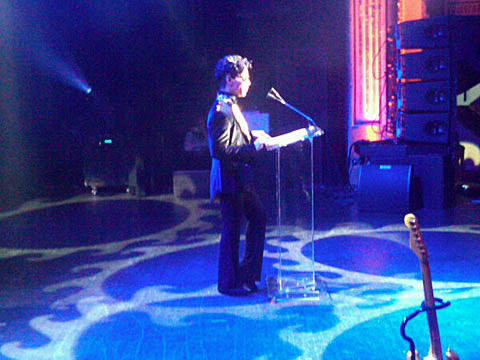 Today, Prince headed to Harlem to the iconic Apollo Theater to announce he would be serving as Master of Ceremonies for a new concert series called 'Welcome To America,' which will be kicking off this December.

Though he was mum on details like dates and tour stops, the 52 year-old singer/songwriter told the crowd that 'Welcome to America' will showcase some of his favorite artists including Maceo Parker, Janelle Monae, Mint Condition, Esperanza Spalding, Cassandra Wilson, Lalah Hathaway and Sheila E.

The Minnesota native also confirmed that he and the New Power Generation would also perform nightly alongside featured acts.

"If you've been to one of my shows, then you know what time it is," the usually media shy artist joked. "You need to come early and come often because every time we play it's always something new. I got a lot of hits. Bring friends, bring children, and bring foot spray because it's gonna be funky."

"I didn't want to talk too much but how many have seen 'Waiting for Superman,' " he asked before bringing out Harlem Children's Zone head Geoffrey Canada who also spoke briefly about how grateful he is Prince chose Harlem as the venue to announce the series.

Prince will play a special guitar for the duration of the concert series and then auction off the guitar for the benefit of Harlem Children's Zone. [Prince.org]

I don't know if "concert series" means he'll play one venue multiple times, or if this is just a regular tour with openers. Details are sparse, but I'm excited either way. Stay tuned for more as it's announced.