"Can someone explain why #Prince and Maceo Parker were serenading Leighton Meester onstage at MSG tonight? #SoWrongForSoManyReasons" -Miguel Gonzalez 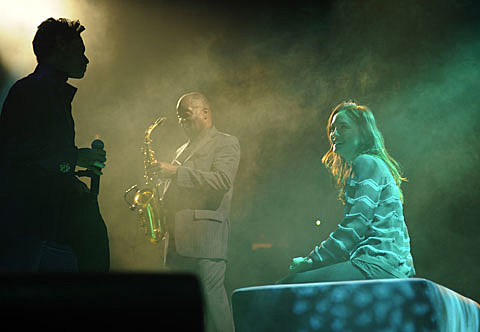 Did Prince pull the ultimate con? Maceo (who played with Prince again at Madison Square Garden last night) and Questlove (who was at the Prince show at MSG again last night, tweeting pictures of his co-worker Jimmy Fallon dancing on stage with Prince) were both on the bill of a late-night show at Brooklyn Bowl last night. The Brooklyn Bowl show was set to run later than Prince's MSG show and rumors spread that Prince would play the Brooklyn Bowl show too (the bill even said "very special guests"). Prince is known for playing late-night shows after his main shows. The rumor not only made sense, it worked. Brooklyn Bowl was packed with Prince fans still waiting after 1am for the purple one to appear on stage.

Apparently it even said "Maybe Prince?" on Maceo's setlist. Maybe Maceo didn't even know if he would show up, or maybe he was in on it. Either way, by 1:15am word started to spread that Prince couldn't be playing at Brooklyn Bowl because he had arrived at the (groupie-free?) real afterparty at the Darby on 14th St in Manhattan. Those who ended up seeing Brooklyn Bowl headliner and jam band Lettuce and Dr. John instead of Prince can at least take solace in the fact that Prince didn't actually perform at Darby, though MSG opener Sharon Jones & the Dap Kings did (and of course Questlove was there to see that too). 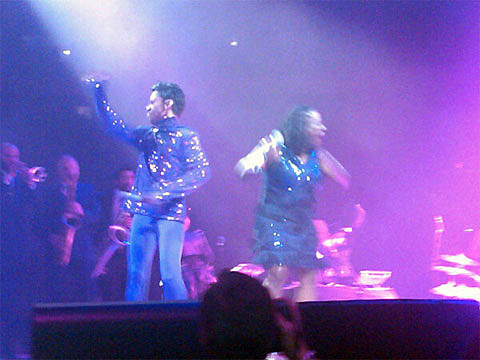 You have another chance to see Prince at MSG in February. A picture of the 1/18 MSG setlist, another pic of Prince, Maceo & Leighton, a rough list of what he actually played, and some videos, below... 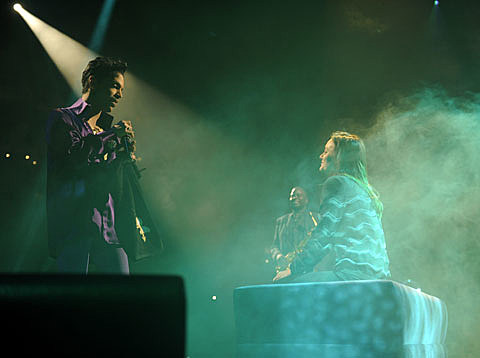 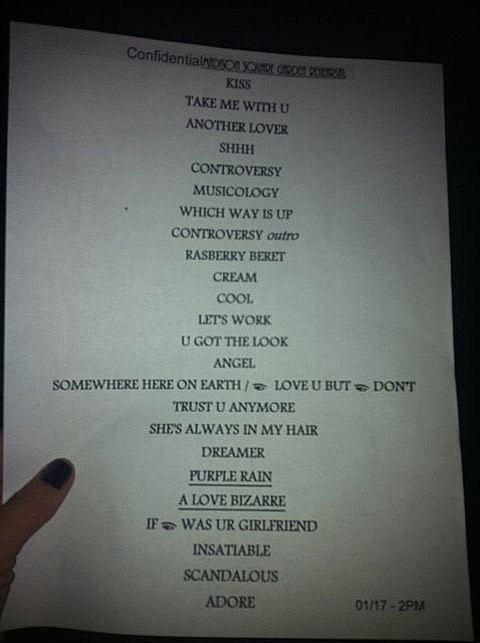 ROUGH SETLIST FROM THE 1/18/2011 show at MSG (via)
he opened with his own version of the purple medley(incl. snippets of When Doves, Pop Life, Sign of the Times, Alphabet Street, Hot Thing,Erotic City, Nasty Girl, Darling Nikki,etc. and then went into
-Kiss(opener ......w/solo dance by him at the end)
-Take me With U
-AnotherLoverHoleinyohead
-SHHH
-Controversy
-Musicology
-Rasberry Beret
-Cream
-Cool
-Let's Work(i think with a little bit of Housequake at the end)
-U Got The Look
-Arms of the Angel(backup singers only)
-Somewhere Here on Earth/Love u but dont trust u anymore(NICE)
-She's Always in My hair
-Dreamer??(on the setlist but i dont remember it)
-Purple Rain
ENCORES:
-Love Bizarre
-if I Was Your Girlfriend
-Insatiable
-Scandalous
-Adore
-Baby I'm a Star
-Let's Go Crazy
-1999
Dance(Disco Heat)
-Peach w/extended solo