poster outside City Winery all week (via @mrtillman17) 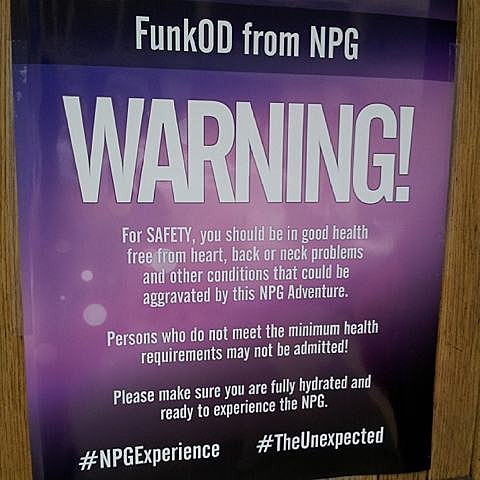 He did it again. Much like Thursday night, Prince showed up last night (8/25) at City Winery for the last of New Power Generation's residency at City Winery. Technically it was this morning as the show -- billed as a VMAs afterparty -- didn't start till midnight. And it didn't finish till almost 6 AM. Sets from Shelby J. and Liv Warfield started off the night, followed by "special guest sets" starting at 1 AM from Cee Lo Green (who played Brooklyn Bowl earlier that night), Family Stone/Grand Central Station's Larry Graham (who plays BB King's Wednesday, tickets are on sale), and Alice Smith (who played other nights of the residency too). Prince took the stage around 3 AM and played almost literally till the break of dawn. Doug E. Fresh, who was there on Thursday, guested again too.

Did you go? What did you think? And how are you awake?

The approximate setlist is below...

--
PRINCE @ CITY WINERY (8/25/2013): SETLIST (via)
- Strays Of The World (sung by Shelby & Liv)
-Days Of Wild(w/Ain't nobody)
-Big City
- 1999
- All The Critics Love You In NY (1999 beat and horn line)
-Mutiny
- Old Friends 4 Sale
-People Pleaser(w/Liv & Shelby)
- ??????
-Dark
-P FUNK(????)
-Something In The Water...(only w/Piano w/Cassendra)
-Nothing Compares 2 U (Duet w/Tamar(????) )
Courtin' Time(instrumental with each NPG hornz getting a solo)
-Get On The Boat
-Act Of God
-What Have You Done For Me lately/Northside/Which Way Is Up/Dancing Machine/Partman (sung with girls and Doug E. Fresh joined)
Encore 1:
Piano Segment (first time in the event Prince played an instrument)
-How Come U Don't Call Me Anymore
-Diamonds & Pearls
-Strange Relationship
-The Ballad Of Dorothy Parker(w/Lyrics)
-Do Me baby
-Under The Cherry Moon
-The Beautiful Ones(w/lyrics)
-Moonbeam Levels
-Sweet Thing
Band comes back on stage
- Take Me With U
-Raspberry Beret
Encore 2:
-Blues Instrumental (w/ Larry Grahm on bass, Prince and Donna on guitar and Hannah on drums)
-Plectrum Electrum(Prince & 3rd Eye Girl only)
****Ida played guitar the whole show,with the exception of the last song
*** No merch
----------
--