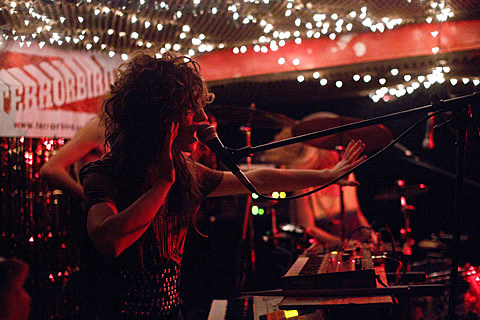 As you may be aware, Friday is December 21 aka 12/21/12, aka the day that the world is supposed to end according to the Mayan calendar. (Many people don't believe the world will actually end, or they probably wouldn't finished up Breaking Bad already.) There are a lot of Apocalypse parties happening, one of which will be at 285 Kent headlined by Prince Rama, which is entirely appropriate given their new album is called Top Ten Hits Of The End Of The World. You can check out the new video for that album's "So Destroyed" below. I bet they'll throw a good Ragnarök event which will double as a holiday party too in case you want to wear your Santa suit. Also on the bill is Dickpic (DJ Dog Dick and Pictureplane) and Ami Dang. Tickets are $8 at the door, but if you'd like to go for free we're giving away a pair. Details on how to enter are below.

======================
For a chance at winning a pair of tickets to see PRINCE RAMA AT 285 KENT: either tweet something that includes both @BrooklynVegan AND "PRINCE RAMA" in the tweet, or send an email to BVCONTESTS@HOTMAIL.COM with the subject line "PRINCE RAMA". Include your first and last name in the email. We'll pick a winner at random and contact them with more details. If you enter by email, it will not be shared with anyone else. Good luck!
======================