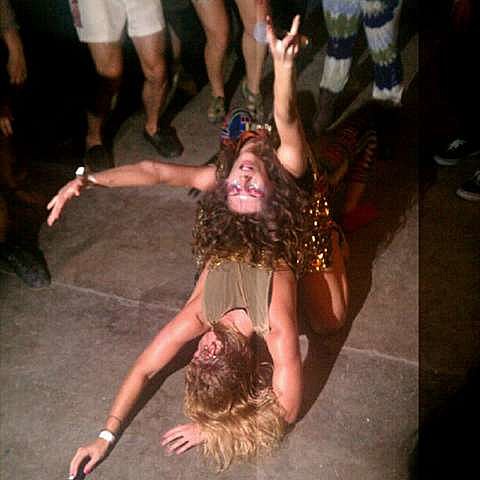 Brooklyn experimentalists Prince Rama played the Basilica Music Festival in Hudson, NY over the weekend (pictured above). Their set was on Saturday (8/11) along with sets by Gang Gang Dance, The Psychic Paramount, Hiro Kone, and others.

You can also catch Prince Rama in NYC even sooner than that when they play DUMBO Summer Friday (presented by Northside, the DUMBO Improvement District, and The O Music Awards Unboxed) on Friday, August 17 with Javelin, Zambri, and Bosco Delrey. It's a day show (start time: 2 PM) and happens at the DUMBO Archway (corner of Anchorage Place and Water St in Brooklyn). There will also be DJs, sound installations by Laura Vitale and food from The Brooklyn Flea.

Prince Rama will release their new album, Top Ten Hits Of The End Of The World, on November 6 via Animal Collective's Paw Tracks label (they're also set to support AnCo on their European tour). They recently revealed the first taste of that album with the track "So Destroyed," which you can download above (via Stereogum) or stream below.

A list of all dates and that stream below...