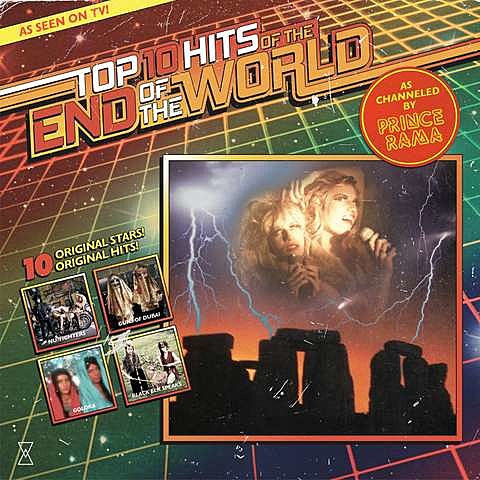 Brooklyn sibling duo Prince Rama will release their new album, Top Ten Hits Of The End Of The World, on November 6 via Paw Tracks. That's the cover art above, and if it looks like some used-bin '80s K-Tel compilation, the album functions in much the same way. Here's a bit from the press release:

Conceived as a pseudo-compilation album, the Brooklyn duo invented ten different pop bands that died during the apocalypse, channelling the ghosts of each one to perform the various songs. Spanning genres and stylistic eras from across the globe, Top Ten Hits explores pop music's relationship to memory, nostalgia, and the spirit world. Incorporating influences as disparate as cosmic disco, motorcycle rock, new-wave, grunge, tribal goth, Arabic pop, and ghost-modern glam, Prince Rama filters each sound through the destroyed lens of a post-apocalyptic future looking back at the wonders of its sonic past...Top Ten Hits of the End of the World isn't just a pop album, it's a retrospective requiem of all pop albums ever made. Nothing like this has ever been attempted by a single band, and its residual echoes will continue to haunt this world and the next.

"Ghost-modern glam"...you can't say these ladies don't have a sense of humor about themselves. Long before the album drops, you'll have a few chances to see them play. (Maybe you already did, last week at Summercreen?) Prince Rama plays the Basilica Festival in Hudson, NY on August 11 and open for Gang Gang Dance at 285 Kent on September 23. All tour dates are listed below.