Prince Rama at MHOW in August (more by Erez Avissar) 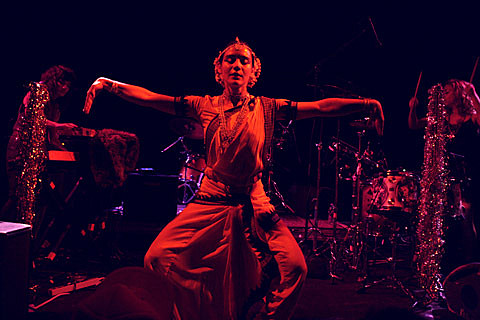 Prince Rama are set to release their upcoming LP Trust Now on October 4 via Paw Tracks. You can grab the album track "Rest In Peace" above. Prince Rama are also putting out karaoke videos leading up to the album's release with other artists singing tracks off the new album. You can check out videos of G Lucas Crane of Woods singing "Incarnation" and Janka Nabay singing "Summer of Love" below.

They'll tour in support of the album opening for the equally otherworldly Gang Gang Dance on their GGD's previously announced tour. It hasn't been revealed if Prince Rama open GGD's October 22 Bowery Ballroom show during CMJ (which tickets are still on sale for), but Prince Rama's dates do list a CMJ show that day.

2011 Artist-in-Residence Prince Rama will transform ISSUE Project Room into a point of origins. They will construct a "sacred space" using gathered matter from off-site urban wilds of Brooklyn. Audience members will be invited to build their own instruments and utilize them in an extended jam session open to anyone who wishes to attend (regardless of musical skill). This aims to investigate the utopian symbology of "the jam session" as a poetic reenactment and microcosmic creation of an ideal democratic society. Cut off from the rest of the world, yet wholly imbedded within it, this ritual space becomes a NO PLACE.

Prince Rama have also been added to the Javelin show at 285 Kent, which is happening on September 17. The Amil Byleckie Band are also on the bill. More details on this show are below.