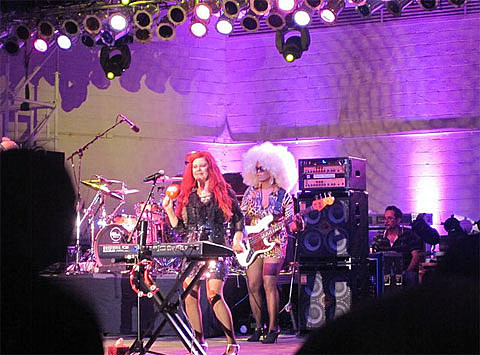 Last Friday morning, roughly 15 inmates were back on duty, cleaning up the aftermath of the B-52s concert while six guards kept a close watch.

The Department of Correction also made sure the inmates weren't from either Crown Heights or Coney Island, so that the prisoners wouldn't be seeing old friends while gathering chairs.

Most locals had not taken issue with the prisoners, but rather had been disappointed that the jobs were going to incarcerated men being paid $1 an hour instead of people in need of work in the ailing economy.

"It's nice the prisoners give something back to society," said Ida Sanoff, an opponent of Markowitz's larger plan to expand the bandshell into a $64-million amphitheater. "But on the other hand, there are a lot of people out of work that would like to get paid -- even if just for a couple of days." [Brooklyn Paper: City jail to Marty: Get your own workers!]

The next and final Seaside Concert of the summer is 'Latino Music by the Sea" night.