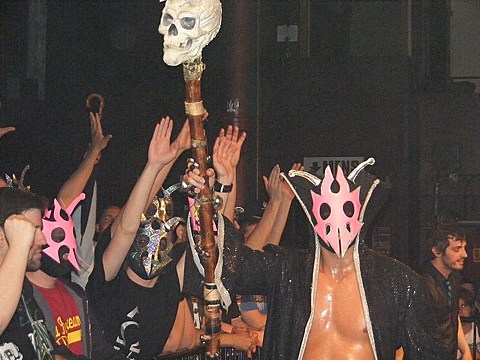 This week's bizarre-and-awesome-signing award goes to Relapse Records, who announced late yesterday that they've signed Philadelphia-based professional wrestler UltraMantis Black. If you've never heard of UltraMantis Black before, you're in luck -- his Wikipedia page is longer and more thoroughly referenced than those of many mid-sized American cities.

I'm not really sure what to expect from UltraMantis Black musically, but the signs are positive so far; Relapse's press release obliquely mentions that the band consists of members of Pissed Jeans and Pilgrim Fetus. This project screams "see it live"; I'm hoping for a show that strikes a fine balance between GWAR and Eat the Turnbuckle. Unsurprisingly, UltraMantis's PR copy is gold:

"UltraMantis Black has waged many battles. As a professional wrestler, he has fought a never ending array of opponents worldwide, hell-bent on usurping the Great & Devious insectoid leader of The Order of the Neo Solar Temple. In his quest to decimate the unconscionable and depraved current state of the cultural grappling landscape, he has guided his Spectral Envoy of the Final Judgement through space and time as they deal out justice in the guise of revenge towards those who desire to harm and exploit the vulnerable and voiceless. Now, UltraMantis Black takes his struggle to a new level.

Set to release their debut EP in early 2014 via Relapse Records, UMB seeks to further spread his gospel through a relentless musical assault of hardcore cacophony. His message is a simple declaration of war. A godless jihad against those who continue to systematically enslave, torture, and murder the Earth and all innocent and sentient life that exists upon it. Clear missives of animal, earth, and human liberation delivered under the secretive cloak of lucha libre to the soundtrack of blasting audio terrorism."

Check out a video of UltraMantis Black "destroying pathetic jobbers," as the presser put it, below.