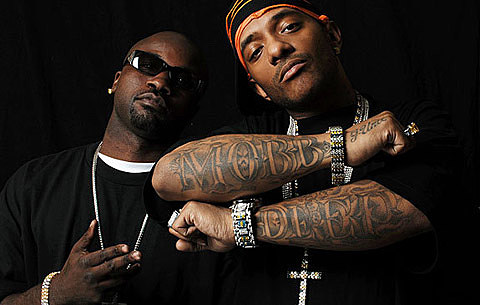 "Three years away from the rap game is a potentially career killing lifetime for most rappers. For Prodigy, one half of the legendary New York mainstays Mobb Deep, the time off from rap has not been entirely fruitless as he's been officialy released from Mid-State Correctional Facility after serving a three-year prison stint.

In October 2006, Albert "Prodigy" Johnson was driving his SUV in New York City with longtime producer and friend Alan "The Alchemist" Maman and after making an illegal U-turn, his vehicle was searched by police. After finding a small pistol in a compartment, the pair were arrested and subsequently released on bond with pending charges." -[MTV News]

The NYC show comes less than a month after the release of Prodigy's autobiography entitled "My Infamous Life: The Autobiography of Mobb Deep's Prodigy."...

"I've been in the music industry since I was sixteen years old, touring the world, selling millions of albums--groupies, drugs, alcohol, sex, radio, TV, magazines, videos, money, jewelry, cars, fashion, rap verses, beats, and studios at my disposal for seventeen years straight. Nonstop. I came to prison when I turned 33. The truth is, I never took the time to mature mentally until now, to step outside of my little fast-paced world and see what needed to be adjusted. It's like I was suspended in time. Like I was sixteen years old for seventeen years. I never grew up. My hardheaded ass took the long hard road to get to this point, but at least I've finally made it. I'm a man now." - Prodigy

You can also catch Prodigy in a bookstore near you in April. He'll be speaking at PowerHouse Arena in Brooklyn on April 20th.

In related news, Raekwon, who recently celebrated the release of his new LP at MHOW, will join The Lox, EPMD, Brand Nubian, and Nice & Smooth for a show at Best Buy Theater on April 13th as part of a "Salute to Hip Hop". Tickets are still available.

Mobb Deep recently dropped a new song produced by Alchemist, "Love Y'all More". Stream that, check out an interview with Alchemist, and some other videos below...