On March 9th Professor Murder opened for Matt & Kim at Bowery Ballroom. Todd Seelie (aka Sucka Pants) has been extensively documenting Matt & Kim's every move - you should check out Todd's entire Matt & Kim SXSW picture tour diary (Brooklyn Vegan/AAM day show included), and Todd's set of pics from Bowery Ballroom too - like this one... 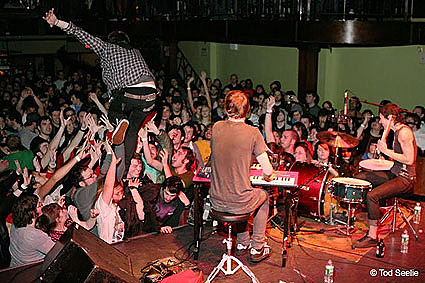 Professor Murder don't play outside of NYC that much (no SXSW for them yet), so the fact that they're making the trip to Chicago to play the Pitchfork Music Festival on July 14th is pretty awesome. They're also playing the following shows:

MORE STUFF
* RySpace has live MP3s from SXSW including one of Matt & Kim.
* Autopilot Films posted a Matt & Kim video on YouTube from the BV show.
* Palms Out Sounds has a Matt & Kim remix among other remix MP3.
* Pop Tarts Suck Toasted also has a review of the Bowery show.
* Matt & Kim tour dates at their Myspace.