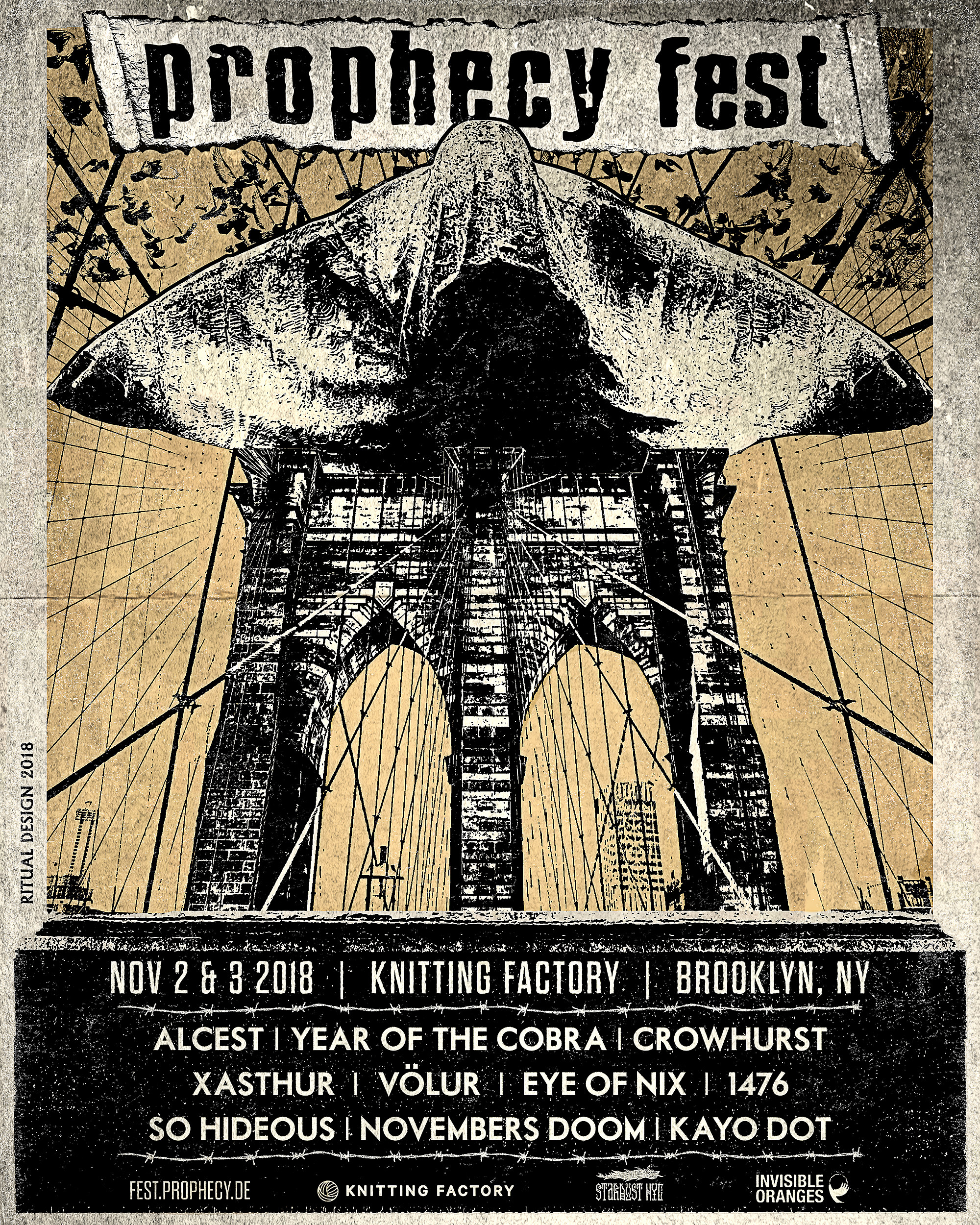 The first-ever U.S. edition of Prophecy Productions' Prophecy Fest (which is being co-presented by Invisible Oranges) happens this weekend at Knitting Factory Brooklyn. It goes down Friday (11/2) with Novembers Doom, So Hideous, Kayo Dot, Xasthur, and Völur; and Saturday (11/3) with Alcest (playing Kodama in full plus a "best-of" set), Eye of Nix (playing Black Somnia in full), Crowhurst, Year of the Cobra, and 1476. See the set times below.

UPDATE: So Hideous had to drop off, so now the Friday show starts 45 minutes later and each band plays a little longer. Updated set times below.

The only place to buy tickets is Prophecy's website but we're also giving away a pair of two-day passes. For a chance to win, enter via the contest widget below. A winner will be chosen at random and contacted with more info. Good luck!

Meanwhile, Invisible Oranges recently ran a few pieces on some of the bands playing the fest, including a review of Eye of Nix's Black Somnia (which initially came out in 2017 and was just re-released by Prophecy last week), an interview with Völur bassist Lucas Gadke (who's also in Blood Ceremony), and an interview with Xasthur.

In one last bit of related news, Eye of Nix members are also in the band To End It All, whose great, horrifying, blood-curling new album Scourge of Woman is out now.

Also listen to music by every band playing Prophecy Fest below:

WHAT LAURA C. BATES OF VOLUR IS CURRENTLY LISTENING TO

* Bathory: Blood Fire Death
It’s hard to believe that this album just turned 30. Lucas Gadke (our bassist in Völur) got me hooked on this a few years ago. This is what I channel when I take my solos!

* John & Alice Coltrane: Cosmic Music
The hold this album has had on me is pretty evident in our freaky free jazz sections. Nice to see Alice’s name on the cover of the reissue!

* Fiver: Audible Songs From Rockwood
This is the best songwriting to come out of the Canadian folk/bluegrass scene in a long while! It makes me believe in folk music again. This record came out last year and tells the stories of women incarcerated in the Rockwood Asylum for the Criminally Insane between 1854-1881. There’s a lot of covert darkness in Canadian history and this album holds a light to one corner of it.

* Dylan Carlson: Falling with a Thousand Stars and Other Wonders from the House of Albion
I’ve become very ritualistic about this droney record from Earth’s guitarist re-imagining the folk music of the British Isles. It helps me believe in fairies which I do in part to nourish my whimsical side but also because, as a violin student once said to me “if you don’t believe in something then you’re just a chicken scratching around in the dirt.”

* The Dirty Three: Horse Stories
I just revisited this album that changed my life in high school. Warren Ellis plays lead violin with such grit, and the time feel is completely off the grid. I can’t think of another record that is so agonizing and warm at the same time.

* A Forest Of Stars: Grave Mounds and Grave Mistakes
This album just came out and these Victorian black metal weirdos are also on Prophecy Productions. They’re actually the reason I sought out Prophecy as a home for Völur. I’m currently trying to convince them to tour with us!

WHAT TOBY DRIVER oF KAYO DOT IS CURRENTLY LISTENING TO

"This is how I get in my freak zone. Maybe it's wrong. Maybe it's right. But it's what I do." - Scott Steiner

#1 Minor Threat - Complete Discography
As a young teenager, this record had all the angst and aggression I was looking for and didn't know how to phrase myself. This record lead me into punk rock and changed my life.

#2 Black Sabbath - Black Sabbath
Even as a young punk rocker, this album was probably played more than anything else. And like most heavy bands, Sabbath is responsible for our blueprint.

#3 Tweak Bird - S/T
In my opinion, the most underrated band in the heavy scene. Unknown to them, they gave YOTC the courage to be a two-piece.

#4 The Bronx - I
Amazing hardcore with a rock n' roll swagger that's tough as nails. This record floored me the first time I heard it and still does.

#5 Queens of the Stone Age - Songs for the Deaf
Incredible songwriting that balanced being heavy, threatening and beautiful all at the same time. Plus the drumming on this record is incredible.

CURRENT PLAYLISTS FROM NEIL AND ROBB OF 1476

WHAT NOVEMBERS DOOM ARE CURRENTLY LISTENING TO