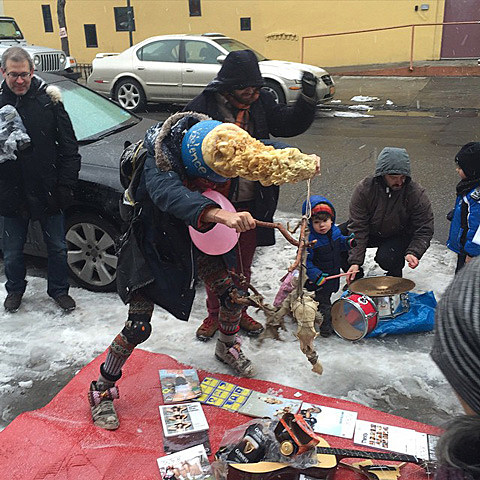 Brooklyn's Talibam! are currently leading a protest outside of VICE's Williamsburg offices, with an attempt at mass telekinesis to levitate the publishing empire's N. 11th St. offices into the East River. "What?" you say? From its Facebook event page:

Inspired by past Public Action which combine public assembly, performance and grand vision, Talibam! Joined by mass ensemble will attempt to levitate Vice Media's office, personnel and the building itself into the East River .

Sprits of the Displaced and dormant creative energies underneath the foundation of Vice Media's HQ will be unleashed, once the building levitates into the East River & a creative re-flowering of the Williamsburg Waterfront Communities will regenerate.

Inspired by the FUGS levitation of the Pentagon in 1967, A diversity of Communities that has been poached, glamorized against their will, forcibly removed and appropriated responds with an action to rid negative spirits from their point of origin.

As we said, this is happening right now, though judging by the instagram above there's not that many people there at the moment. The "levitation" began at 3:30 PM, and there is one in Venice, CA too:

In solidarity with friends in NYC, I will be performing/conducting/
coordinating the two scores by Talibam! Matt Mottel & Kevin Shea in front of VICE Magazine office in Venice Beach tomorrow, at 12:35 PM PST. Join me with an instrument, corn meal, cultural ephemera a la scores posted below.

We will synchronize in LA, simultaneously attempting to levitate their office into the Pacific Ocean, hopefully before they move into a giant warehouse in the El Sereno area of East LA, or something equally horrible, and qualify for another multi-million dollar tax break.

Vice: 589 Venice Blvd, Venice, CA 90291.
behind them is Electric Avenue...
WE GONNA ROCK DOWN TO ELECTRIC AVENUE.
AND THEN WE'LL TAKE IT HIGHER.