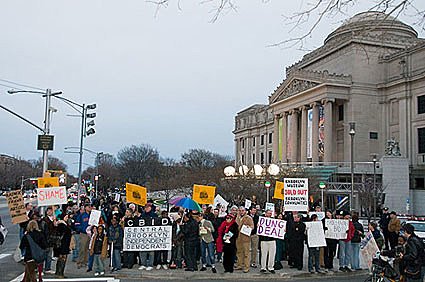 Outside the Eastern Parkway art institute, hundreds of protestors started gathering at around 6:30 pm to greet more than 1,000 Museum supporters as they entered for cocktails and hors-d'oeuvres of miso-marinated cod and spicy taro with caviar.

Protesters condemned the Museum's decision to honor Ratner, some holding signs reading, "Con Artist" and, in a particularly nifty bit of memory, "Dung Deal," a reference to the Museum's 1999 controversy over its "Sensation" exhibition, which featured a painting of the Virgin Mary adorned with elephant dung.

Referring to the protesters outside, Borough President Markowitz -- a major support of Atlantic Yards -- smiled and said, "It shows that this is a great country." [Brooklyn Paper]