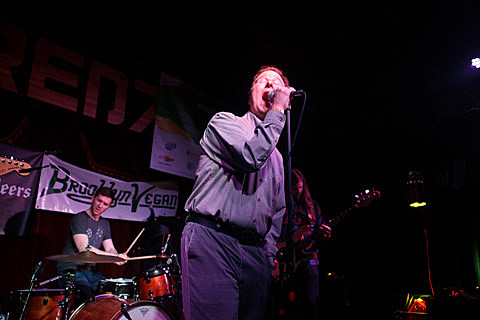 As mentioned, Detroit's Protomartyr will release their second album, Under Color of Official Light, next week (4/8) via Hardly Art. There are a lot of bands out there mining post punk territory these days, but few do it as well, such conviction and great song after great song, as Protomartyr do here. (When singer Joe Casey chants "nothing you can do" over and over in "Scum, Rise!" he means it.) It's one of my favorite albums of 2014 so far and you can listen to the whole thing now via NPR.

Protomartyr will be spending a lot of time on the road this year. Their tour with Austin's Spray Paint starts next week and hits NYC for two shows -- Death by Audio on April 12 and Cake Shop on April 14. After that, Protomartyr will join up with Whatever Brains, then a string of midwest shows with Cloud Nothings.

Then in June, they'll be out with Parquet Courts (who have a new album soon), including the show at Brooklyn's Sugarhill Supper Club on June 11 with Future Punx and Xerox. Tickets for that are still available.

They are definitely worth catching if they're playing near you, they were one of my favorites at SXSW this year. Updated Protomartyr tour dates are listed below...