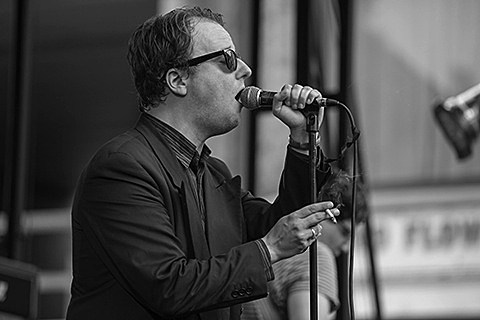 Unless something truly amazing comes along this year in the next three months, Protomartyr's Under Color of Official Right seems like a likely contender for my favorite album of 2014. (It is certainly the most quotable.) The band have been through town a few times already this year and will be back in NYC later this month for CMJ, including the free BrooklynVegan day party at Baby's All Right on Friday, October 24. Rest of the lineup and more details about the rest of what we've got planned for CMJ still to come.

Protomartyr will also play that night at Death by Audio for the Inland Empire showcase with Eaters and more TBA. They're also playing free early evening show at Cake Shop on Saturday (10/25, 6:15 PM). And before all those Protomartyr play the Sub Pop / Hardly Art showcase at Knitting Factory on 10/23 with Obits, Lee Bains III & The Glory Fires, Luluc, Gem Club and S (tickets).

The band's only other non-CMJ at the moment is one in their hometown of Detroit on 10/14 with Lace Curtains and Eaters. All dates are listed below.

Protomartyr recently recorded a La Blogothèque take-away session, performing stripped down versions of "What the Walls Said" and "Scum, Rise!" at France's Route du Rock fest. Watch that, and stream Under Color of Official Right, below...