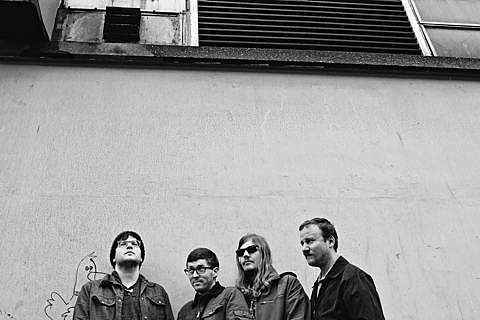 Post punk sounds and industrial towns seem to go hand in hand. Detroit's Protomartyr have a sense of urgency and anger that could've sprouted from somewhere like Manchester or Cleveland in 1979. The band's second album, Under Color of Official Right, will be out April 8 via Hardly Art and while it doesn't specifically sound like Joy Division or The Mekons or The Fall (ok maybe the Fall a little bit) or Pere Ubu, there is definitely a similar approach, attitude and intelligence. Two of the album's most immediate songs -- the angry, sneering ripper "Scum, Rise!" and the moodier, more atmospheric "Come & See" -- can be streamed below.

Last in NYC in November, Protomartyr will be on tour next month, starting in Austin for SXSW (they're playing a lot of shows there) and will hit the Midwest and East Coast afterwards. The tour includes two shows in NYC: April 12 at Death by Audio and April 13 at Cake Shop. Both those shows are with tourmates Spray Paint, and during other sections of the tour they'll do stints with Whatever Brains and Cloud Nothings.

All tour dates are listed, along with the song streams, below...