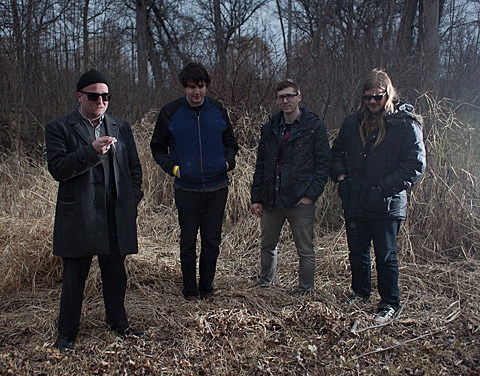 Protomartyr have a new split-single with Kelley Deal's band R Ring that will be out via Hardly Art in June (digitally, you can get it on Tuesday, April 14). Kelley also sings on Protomartyr's side, "Blues Festival," which is a cautionary tale of hyped bands: "Hell is forever being local support / Hell is opening up a five-band bill / Hell is headlining the Blues Festival." Stream it below.

Protomartyr will headline a three-band bill in NYC on Wednesday (4/15) at The Wick which BrooklynVegan is presenting. It's part of their tour with new Sub Pop signees The Gotobeds, and Grooms are on the bill as well. Tickets are still available and we're giving a couple pairs away.

The single with Protomartyr is one of two splits R Ring (which is Deal with Ampline's Mike Montgomery) are releasing. The other is with Kentucky garage rockers Quailbones and will be released in July via Sofaburn Records. You can stream R Ring's side, "Singing Tower," below. R Ring are heading out on tour this week. No NYC shows have been announced but all dates are listed below.