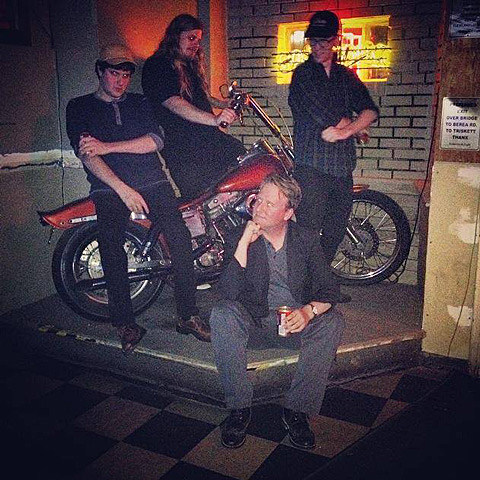 Protomartyr's second album, Under Color of Official Right, is one of the year's most acclaimed albums, matching witty if bleak observations to snarling postpunk backing. The band spent most of the year on the road, out on tours with Spray Paint, Whatever Brains and Parquet Courts, making space for both SXSW, CMJ and one of DbA's final shows, too. Which leads to Protomartyr's Top 10 of 2014 list they sent us, which could have only been sent by them. Here's the setup:

As is often the case with touring, all you have is time and it must be killed. Going to see a movie, any movie, is our default band activity. We go to the theater and whatever is showing next is what we see. We'd like to think this is the reason why we saw so much shit, but honestly, seeing something awful became an addiction. Other than that, the only criteria was that the theater had to sell booze. That became an addiction as well.

You won't find Boyhood or Birdman or Grand Budapest Hotel on this list, but it's a funny read and works as a travelogue as well. Protomartyr's "Ten Movies We Saw This Year" are listed with commentary below.

In other news, Protomartyr are part of a Joyful Noise Recordings' new subscription record club, the 2015 Flexidisc Series where "some of our favorite artists to release never-before-heard recordings on a fleeting analog format." Other artists contributing to the series include Cloud Nothings, Wye Oak, Deerhoof & Celestial Shore, Sonny & the Sunsets, and King Buzzo.

If you you're going to be in Detroit around Christmas, Protomartyr are playing on December 26 at Jumbos, a place they wrote a song about on their first album. Flyer for that is below as well... 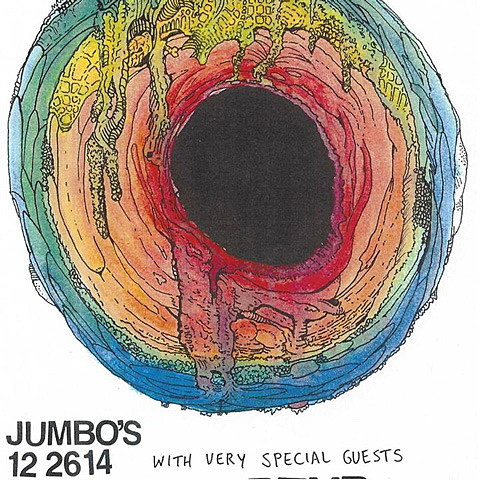 PROTOMARTYR - TEN MOVIES WE SAW THIS YEAR
1) Brick Mansions (Columbus)
Saw this in a fine dining restaurant (see #9) in some ghost town new development across from the hockey arena in Columbus, Ohio. What can be said about cinematic perfection? If Roland Barthes was alive, he'd have a field day with all the signifiers and hermenuetic skidding. Detroit is depicted as a Euro-Trash wonderland of semiotic dissonance that on the retro-futuristic map is in actuality Chicago. Hell, the police surveillance bug has a picture of an insect on it. The acting runs the gamut from Stanislavskian method (RZA) and old Hollywood pathos (Paul Walker), all the way to a seeming recreation of Herzog's "Heart of Glass" hypnosis acting (The rest of cast) Truly a modern classic.

2) Under The Skin (Kansas City)
A visually stunning film with a really great soundtrack that defies easy explanation. Actually the real "best" thing we saw all year. Sure, it didn't have people getting repeatedly kicked in the face or RZA trying on a Jamaican accent sporadically, but not everything can be "Brick Mansions". We saw this in a nice old movie house down the street from a statue of Chuck Berry. They served beer.

3) Blended (Los Angeles)
Hanging out and shooting the shit at our favorite bar McGuffin's would be what we'd devote our time to if it wasn't for the whole touring and playing shows thing. So it's nice to find McGuffin's in AMC's throughout the country. Our bartender was from Michigan and he offered up an honest assessment of Blended ("it's shit") like a good Michigander should. But really, for an Adam Sandler movie it...wasn't that bad? Sure it's an hour and a half commercial for Hooters and maybe the whole movie is based on the idea of him and the rest of the cast getting a free vacation to Africa, but Terry Crewes is in it, so it's a draw. Didn't see any celebrities in LA, but as we were skulking into the theater, a fellow in a car shouted "Hey Protomartyr! You rock!" So who's the real celebrity?

4) X-Men: Days Of Future Past (Berkeley)
We had to wait in a line to see this as it was opening day. Not cool. But after an exhaustive search to find a place that served alcohol, it would have to do. When it was revealed that JFK was assassinated because he was a mutant, an older lady in the audience exclaimed, "oh my?!"

5) The Best Of Me (Hermitage, PA)
A not-quite-but-let's-just-stop-and-get-drunk halfway point between Detroit and NYC is Hermitage, Pennsylvania. No movie theater in Hermitage sells alcohol (we called them all) so we had to stop at a liquor store nearby for booze to sneak in. The liquor store had the exact same layout as a Blockbuster Video so it felt like we were still supporting the MPAA. This movie has the funniest case of two actors playing the same character at different ages. PS: The Best of Me is your heart, in case you didn't know. If by chance your hillbilly mafia father shoots you because you testified against him in open court, donate your heart to your high school sweetheart's son, who just happened to get into a car accident that exact same night, thus proving you love her more than her golf obsessed husband. Got it?

6) Cold In July (Somewhere in the South)
We had to sneak in refreshments. It was in a mall next to a Hot Topic and nobody seemed to be working there save the ticket taker. We have all forgotten what this movie was even about (even the sober driver) besides bad haircuts and hambone acting.

7) Transformers 4 (Munich)
The woman at the concession stand thought we were joking when we ordered 20 beers for this movie. We cheered when some piles of CGI garbage fought in front of our old practice space (it was filmed in Detroit). After we realized we were 2 hours into the movie and Marky Mark hadn't met the robotic dinosaurs yet, half of us instantly fell asleep. If Munich has any culture, we have no idea.

8) Ouija (Hermitage, PA)
Back to our favorite theater that doesn't serve booze. Can you believe we were the only people there to see Ouija on a Thursday night? Apparently this movie had a plot. One of girls murdered by the Parker Brother's game had a "Shakespeare Rulz" bumper sticker in her room. Why do kids in movies always have a ton of weird band posters in their room and why are they always hung at kooky angles?

9. Transcendence (Columbus)
We didn't see this movie at a movie theater. We were told numerous times that we weren't in some dinky picture house, why this was a fine-dining restaurant that just happened to show first-run movies. And serve popcorn. And soda and candy. With movies showing on giant screens and stadium seating. Don't be confused if the place looks, feels and sounds exactly like a movie theater. Nope, just a cool restaurant that happens to show movies. You idiots, lots of restaurants have seats that only face one way, and popcorn. Have you never been to a restaurant before? Look, they have a dish of mints at the host stand. This is a fucking restaurant. This movie has Johnny Depp in it as a computer. Our eyes were bleeding by the end of it.

10. Maleficent (Memphis)
One of the least enjoyable pieces of shit ever released, but we only saw 10 movies this year.