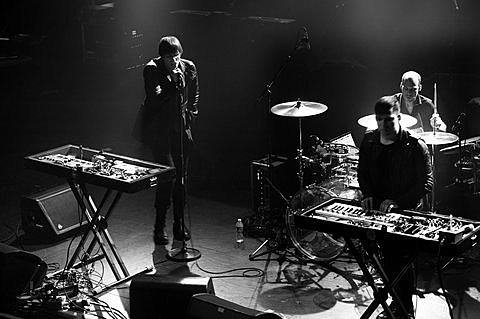 Prurient, aka Dominick Fernow who is now also in Cold Cave, will play his first Prurient NYC show in two years as part of the Stereogum/Sacred Bones show at Public Assembly on June 17th. Prurient is a recent addition to the previously mentioned Northside Festival show which also includes the debut NYC performance of Iceage and appearances from Yellow Tears, Lost Tribe, The Men, and DJ Wes Eisold (Cold Cave). Tickets are on sale or you can try to use a badge.

Iceage are preparing to release their new LP New Brigade on June 21st via What's Your Rupture?. Check out "White Rune" from that above and a video for "New Brigade" below. The Danish band's performance at Public Assembly is part of a string of East Coast dates for the band in June, after which they'll return home to graduate high school (no shit).

Prurient is comprised of one Dominick Fernow, he of Hospital Productions/Ash Pool/Cold Cave fame. Prurient recently released the Many Jewels Surround The Crown 7" via Hydra Head Records, a track that is also featured on the forthcoming Hydra Head release Bermuda Drain due in June.

As discussed, Cold Cave are coming back to NYC twice as part of a tour in the coming weeks. Tickets are now on sale for both shows too: Knitting Factory on July 12th with Cult of Youth and Bowery Ballroom on 8/6 with Austra.

All Iceage dates and that video is below.