Prurient at Saint Vitus in January (more by Greg Cristman) 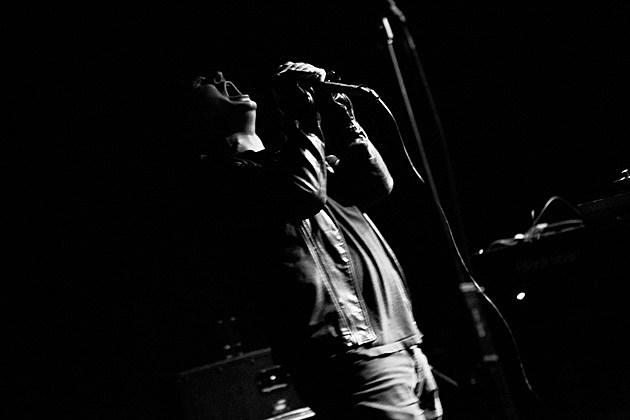 NYC label Hospital Productions is hosting a special, non-Wednesday, early (8PM) Nothing Changes party at Home Sweet Home on Sunday, August 10 in mark of the 21st anniversary of the death of Euronymous of the forerunning Norwegian black metal band Mayhem, who was notoriously killed by Varg Vikernes of Burzum. Prurient, Clay Rendering, Lussuria, Dual Action, Sandness and DJ Akitsa (of Montreal black metal band Akitsa) will perform. That's a pretty good smattering of Hospital heavyweights, touching on ambient and noise, and it's a relief for NYC area people who didn't get the chance to catch the "Summer Always Summer" tour with Clay Rendering, Lussuria, and Dual Action, which skipped the area. They'll be playing Mayhem's classic debut album De Mysteriis Dom Sathanas in its entirety at midnight.

Without having to make a case for links between noise/PE and black metal, Hospital Productions has many direct ties to black metal, having released records by Sargeist, Akitsa and Dominick Fernow's own Ash Pool, to name a few, and not to mention that the Hospital store was a trove of black metal obscurities. Also noteworthy is the relatively recent news that Prurient signed to the influential metal label Profound Lore, and Prurient's next album will be produced by Arthur Rizk, who has worked with Power Trip in the past.

Mayhem, and Øystein "Euronymous" Aarseth in particular, were massively influential in shaping black metal as we know it today. Aarseth ran the record label Deathlike Silence Productions, responsible for the earliest releases of second wave black metal, and owned the record store Helvete, a nexus of the early Norwegian black metal scene, in Oslo. Euronymous was notoriously murdered by Varg Vikernes, of Burzum, who had recorded with Mayhem and released records on Deathlike Silence. Vikernes served about 15 years of his 21 year sentence in prison for the murder of Euronymous, and was recently found guilty of "inciting racial hatred and glorifying war crimes" in France.

As Hospital sometimes does for live performances, there will be two new tapes released at the show, a Dual Action 8-cassette box titled nightmare angel of the expressways, and Various Algae - Civic Occult Biology, a comp of, presumably, Hospital artists. The show appears to be Prurient's last before heading to Russia, Norway and Austria.

Flyer for the Euronymous tribute show below... 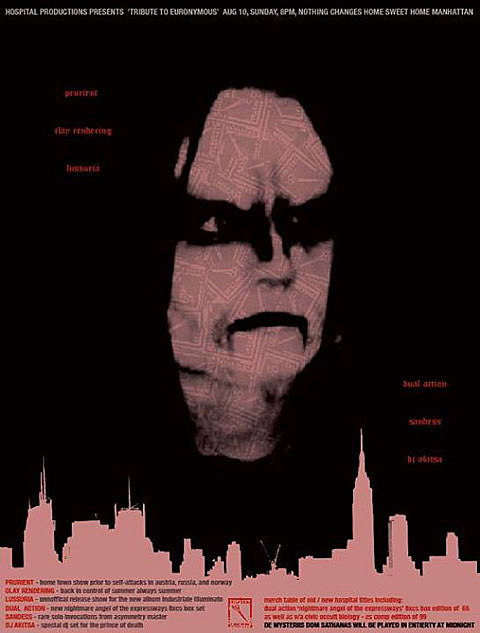