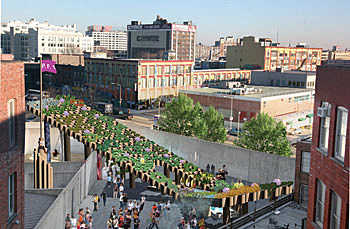 P.F.1 (Public Farm One) is an urban farm concept that evokes the look of a flying carpet landing in the P.S.1 courtyard. Constructed from large cardboard tubes, its top surface will be a working farm, blooming with a variety of vegetables and plants. The structure will create a textured, colorful, and constantly changing surface in contrast with P.S.1's angular concrete and gravel courtyard. P.F.1 will work as an interactive bridge between outside and inside, creating multiple zones of activity including swings, fans, sound effects, innovative seating areas, and a refreshing pool at its center. The installation will be a living structure made from inexpensive and sustainable materials recyclable after its use at P.S.1....

P.S.1 will hold a summer opening celebration in Long Island City on June 22nd with a performance by Ecstatic Sunshine. Then they officially kick off the weekly Saturday ourdoor (urban farm-looking) parties on July 5th with Nublu Orchestra. From there we get some DFA, Kelley Polar, Apollo Heights, Matthew Dear and much much more....