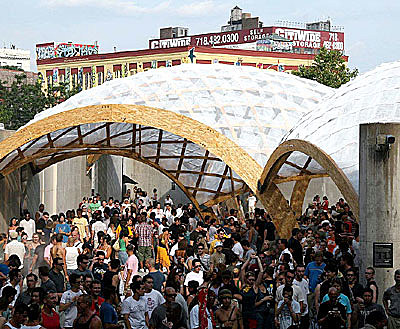 The PS1 Warm Up party in Long Island City has announced their line up for the summer...As I mentioned, this party is incredible in its depth of talent and ridiculous setting. All of the dates are below and there is no shortage of disco parties from DFA to Rong to a live Escort show. I love disco in the daylight... -David Bruno

P.S.1 Contemporary Art Center is pleased to announce Warm Up 2007, the critically acclaimed curated series of live music and DJ acts that has become one of New York’s most exciting and anticipated summer events. The backdrop of this year’s Warm Up is Liquid Sky by Los Angeles-based firm Ball-Nogues, winner of the 2007 MoMA/P.S.1 Young Architects Program.

Warm Up 2007 features a new curatorial team led by David Weinstein, Jason Drummond, and Zach Layton and promises a summer-long adventure into the wild, the unexpected, and the dangerously danceable. Each Saturday, music and performances will revolve around a theme or guest host. Objektivity, Tummy Touch, Rong, DFA and other music labels have been invited to assemble six-hour programs featuring their most exhilarating artists. Added into the weekly mix is challenging new work from innovators in audio technology, new instruments, new media, and experimental sounds.

“Warm Up was born 11 years ago as a P.S.1 project fueled by a hunger for the new and adventurous music bubbling up around town,” said Warm Up organizer David Weinstein. “This year we deliberately returned to that model by exploring the many new clubs, concert halls and media centers during one of the most active and exciting New York seasons in a decade. In order to bring a challenging, compelling, and entertaining program to P.S.1, we have consulted with the most original producers covering the whole musical spectrum in New York from noise and ambient, to hip hop and punk, to classical and non-western genres.”

The music series, produced by P.S.1 Director of Operations Tony Guererro, was conceived in 1997 as a summer-long dance party to attract crowds to Long Island City, Queens, and P.S.1. It now draws thousands of locals and international visitors every Saturday for a merging of exciting music, contemporary art, and fascinating people-watching. It has received critical attention both stateside and worldwide. Time Out New York readers voted Warm Up the “best club” in New York City, and The Observer (UK) ranked it #10 of “The 20 Hottest Beach Parties in the World.”

Warm Up will also be streamed live on Art Radio WPS1.org. Simply visit www.wps1.org every Saturday, June 30 through September 1, from 3:00 p.m. to 9:00 p.m. EST and enjoy full access to the music, along with on-the-spot artist and DJ interviews. The broadcasts will be archived on WPS1.org.

Hours and Directions
Opening June 30, Warm Up 2007 will be held for ten consecutive weeks, each Saturday through September 1, from 3:00 p.m. to 9:00 p.m. P.S.1 Contemporary Art Center is located at 22-25 Jackson Avenue at 46th Avenue in Long Island City, Queens, across the Queensboro Bridge from midtown Manhattan. It is easily accessible by bus and subway. Traveling by subway, visitors should take either the E or V to 23 Street-Ely Avenue (note that the V does not run on weekends); the 7 to 45 Road-Courthouse Square; or the G to Court Square or 21 Street-Van Alst. Visitors may also take the Q67 bus to Jackson and 46th Avenues or the B61 to Jackson Avenue. Visitors using public transportation are advised to check the MTA Weekend Service Advisory.

Young Architects Program
2007 marks the eighth annual MoMA/P.S.1 Young Architects Program, a competition that gives emerging architects the opportunity to realize an outdoor environment designed to host the Warm Up series. This year’s project, Liquid Sky, by the Los Angeles-based firm Ball-Nogues, features a canopy of tinted, Mylar petals that will immerse the viewer in kaleidoscopic patterns of colored light. Since 1998, artists and architects including Gelatin, Philip Johnson, SHoP, ROY, William Massie, EMERGENT/Tom Wiscombe, Xefirotarch, and OBRA have transformed P.S.1’s courtyard into an urban beach with works of interactive architecture and sculpture that have inspired both critics and audiences alike.