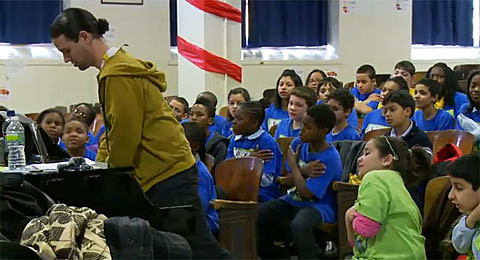 "The PS22 Chorus is an elementary school chorus from Public School 22 in Graniteville, Staten Island (New York). It is composed of 60-70 fifth-graders, and is directed by Gregg Breinberg. Students are assigned to the chorus after an annual auditioning process at the beginning of each school year. PS22 is the largest elementary school in Staten Island which draws students from a wide cross section of ethnic groups and socio-economic levels. The chorus meets twice a week during school hours to practice, and performs throughout the year at school functions, local events, and on special requests. It has been featured on several major national news and music networks after its videos had gained international attention within the popular video-sharing site YouTube. As of January, 2011 the chorus's videos have been watched more than 27,000,000 times." [Wikipedia]

PS22's view counts are only going to keep getting higher now that they've been invited to perform on this year's Academy Awards (at the Feb. 27th ceremony in Los Angeles). Congrats to them! Check out a video with some of their reactions after hearing the news below.

Their first appearance on this site came when they appeared on stage with Crowded House at Wellmont Theater. You might also know them as the children's chorus you hear on Passion Pit's "The Reeling."

Check out some brand new videos below, shot by filmmaker Jonathan Kalafer, of the group during some improv sessions and one of them doing an acoustic version of MGMT's "Kids" (a song they were already famous for covering). A recent one of the chorus covering Freelance Whales and some other ones are down there too...

Kylie Minogue & PS22 Chorus "Can't Get You Out of My Head"