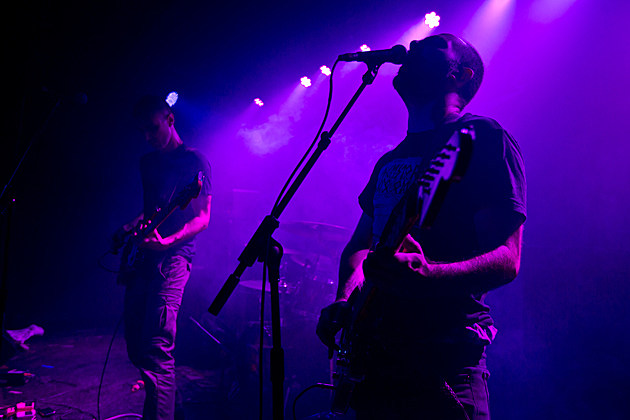 NYC experimental musician Charlie Looker (currently of Psalm Zero, formerly of Extra Life, Zs and others) is curating and performing at The Stone from January 13 to 18. As you'd probably expect, he's got a lot of cool collaborators lined up. The full schedule is below, but here's a few highlights:

The 10 PM show on 1/13 has Charlie playing with bassist Tim Dahl (Child Abuse, etc) and drummer Weasel Walter (Behold... The Arctopus, etc), who are also both joining Lydia Lunch at her Retrovirus show three days earlier. For that show they're promising "mangled non-songs drawing from no-wave, free jazz, and war metal, with this highly accomplished/demented rhythm section."

On 1/14, Charlie's playing with guitar great Mary Halvorson (who's also a Weasel Walter collaborator and recently opened for King Buzzo) at both the 8 PM and 10 PM shows, but the late show is especially exciting, bringing Krallice guitarist Mick Barr and former Battles guitarist/vocalist Tyondai Braxton into the fold.

On 1/15, Charlie plays the 8 PM show solo, and then brings his Psalm Zero bandmate Andrew Hock with him for the late show, as well as Jamie Saft (organ, electronics) and Merzbow/Venetian Snares collaborator Balazs Pandi (percussion).

On 1/16, the 10 PM show will have Charlie's Northern Spy-signed band Seaven Teares joined by two exciting guest vocalists, Caleb Burhans of Alarm Will Sound and Zohra Atash of Azar Swan.

On 1/17, Charlie and Andrew Hock are playing solo sets at the 8 PM show, and then joining forces for an acoustic Psalm Zero set at the 10 PM show. New songs are promised, and $15 gets you into both shows for that night.

Finally, the last night (1/18) the 8 PM show features an ensemble that includes Andrew Hock and many others, playing a brand new 45-minute long composition that Charlie wrote. Then the 10 PM show will have one of Charlie's other bands, Period, joined by legendary saxist Tim Berne, who's been active since the '70s and a collaborator of Nels Cline and many others.

Full schedule for Charlie Looker's residency and more info below...

**FIFTEEN DOLLARS gets you into both sets this evening**