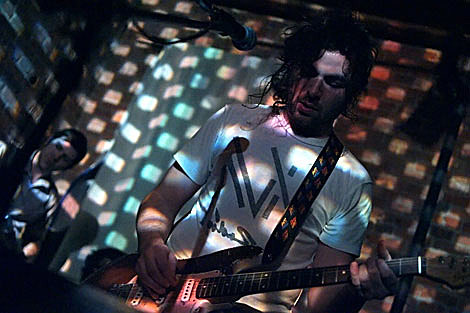 TooCoolToDie: I've heard rumours that you've now signed with Woodist. If so, why the change up from Siltbreeze?

Matt of Psychedelic Horseshit: The funny thing, at this level, is that there is no actual 'signing' per se. It's just an agreement usually made in person or via the phone/net. I ordered some stuff from Woodsist like a year ago and Jeremy (the boss), who is super nice and awesome, offered to do a 7" for us. Over the course of 9 months it grew into a 12" and came out a couple weeks back. We aren't exclusively 'signed' to Woodsist though and will release our next proper full length on Siltbreeze, which is our real label 'home' if we have one. If anyone out there wants to actually 'sign' us though, for real, with money and stuff, then we are totally down. Not opposed to 'label' labels at all.

Psychedelic Horseshit are coming back to NYC to perform at the Woodsist / Captured Tracks Festival on July 3rd. Advanced tickets for the fest are still on sale, both two day passes, as well as single day tickets: July 3 & July 4.

PH will also stick around at least 2 more days after the fest, to headline their own Brooklyn show on July 5:

No other dates are scheduled for the Ohio band at the moment.